NOW THAT’S A BEAST OF BODMIN!

THERE’S always been something preposterous about the security overkill which surrounds U. S. Presidential visits abroad. Mile-long motorcades may not look out of place in Washington, but 17 supersized black SUVs steaming along the A30 in Cornwall is positively incongruous. I’ve heard of the Beast of Bodmin but this is ridiculous. Biden’s convoy reminded me of Clarkson and the Top Gear team driving a giant Ford 150 pick-up truck through the Cotswolds and getting stuck every 50 yards. I also remember boxing’s Frank Warren telling me about his American joint promoter Don King buying him a Humvee as a thank-you present after helping organise a successful world title fight. This massive military vehicle was the first to arrive in Britain after gaining popularity during the first Gulf War. King presented it to him at a hotel in Park Lane and Warren had to drive it home to Hertfordshire. As he progressed through the narrow streets of North London, Frank thought he could hear clapping everywhere he went. It was only later that he realised it wasn’t applause, it was the sound of wing mirrors being ripped off parked cars. Meanwhile, the Ring of Steel round the summit resembles the Green Zone in Baghdad. They’re prepared for every possible mode of terrorist attack from land, sea and air. But I wonder if the natural world might have other ideas. The plane carrying the Washington Press Pack — America’s Boys In The Bubble — was delayed for several hours by a swarm of cicadas, described as a superfamily of flying insects. Meanwhile, our native seagulls are sharpening their beaks. Only this week, the Air Force reported that gulls have graduated from attacking small drones and now have the Stealth bomber fleet at RAF Fairford, near Swindon, in their sights. If Stealth bombers are under threat, what chance does the Presidential helicopter Marine One stand against the seagulls of Cornwall’s Carbis Bay! 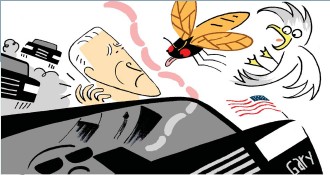