A SHIMMERING crescent hanging in the sky behind the US Capitol, this was sunrise during a partial eclipse in Washington yesterday. The phenomenon caused by the moon passing in front of the sun was seen across much of the northern hemisphere. In the Arctic, an ‘annular’ eclipse left the sun as a ‘ring of fire’ around the moon’s shadow. In some parts of the US, up to three-quarters of the sun was hidden. But the effect in the UK was far less dramatic. In London at its peak in late morning, around 20 per cent of the sun was blocked. 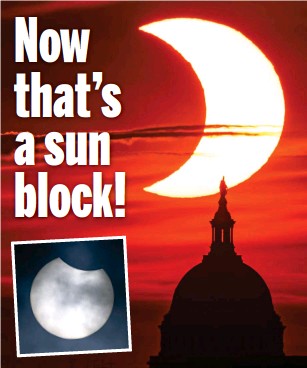