Out on bail, Belize socialite sees shrine to shot officer

FLANKED by an armed bodyguard, this is Jasmine Hartin yesterday as she walks past a memorial to the Belizean police officer she is accused of killing. The partner of Tory billionaire Lord Ashcroft’s son was attending a police station as part of the conditions of her bail over the ‘accidental shooting’ of Henry Jemmott. The decision to release her came after she spent a week on remand in a notorious jail in the Central American country, having initially been deemed a ‘flight risk’. Hartin, 32, has been charged with manslaughter by negligence after the officer was allegedly shot as the friends drank shots during a night out last month. High-powered lawyers for the Canadian mother of four-year-old twins petitioned one of Belize’s supreme court judges to release her on bail on Wednesday and the socialite was seen being bundled out of the jail into a waiting car hours later. As part of the conditions she has had to hand in her passport, observe a curfew and report daily to the station in San Ignacio – a five-hour journey from the home near the tourist town of San Pedro where she and Lord Ashcroft’s youngest son Andrew run a luxury resort. Hartin was hidden behind a face mask and baseball cap as she arrived at the police station promptly yesterday in a black BMW to answer bail at 7.02am. She spent just four minutes inside, signing papers and speaking with officers before returning to the SUV. Hartin was released on bail after her legal team led by Godfrey Smith, Belize’s former attorney general, argued successfully that as the mother of young children with ties to the country, she did not pose a serious flight risk. Last night the devastated family of Mr Jemmott, a 42-year- old father of five, said it came as ‘no surprise’ that the well-connected and wealthy socialite had managed to overturn the original decision to refuse bail. His sister Cherry said: ‘When I heard... I was not surprised, it was expected.’ Miss Jemmott, who is also a police officer, said the family were holding a meeting last night to discuss their options, including their plans to bring a wrongful death legal action against Hartin. They have already voiced their discontent over the decision to charge Hartin with manslaughter by negligence – a lesser indictment normally given to dangerous drivers involved in fatal accidents. The socialite, who was found covered in blood sat on a jetty in San Pedro where Mr Jemmott died, claims he was shot accidentally when he suggested they practise loading his gun. In Hartin’s initial police statement, which was read out to Belize’s supreme court, she said she had been drinking shots with the off-duty officer – an old friend of the couple – when he asked her to unload the pistol. However, the magazine is said to have got stuck and fired accidentally. The court also heard that the maximum sentence for manslaughter by negligence was five years in prison but convictions normally resulted in fines. Justice Herbert Lord ruled that Hartin did not pose an ‘unacceptable risk of flight’ and set bail at £10,600 with a surety of the same amount. Lord Ashcroft is a former deputy chairman and grandee of the Conservative Party as a major donor. He has numerous business interests in Belize. 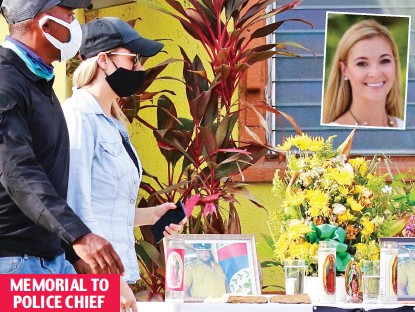