SOME years ago, Bella Bathurst went to live in a cottage on 180-acre Rise Farm in Wales, on the southern slopes of the Black Mountains. and out of her experience she has drawn this priceless portrait of one of the least understood and frequently most vilified of people: farmers. It should really be read by all in this country who buys food — i.e. everyone. If anyone wants to understand farming better, I would press this book into their hands, along with James Rebanks’s Pastoral. The writing is at once tough and lyrical, unsentimental, piercingly truthful and observant. She meets not only farmers but also a rural match-making agency, a butcher and a knackerman with his bolt gun. Once he even had to finish off a giraffe at a local zoo. ‘We couldn’t get it in the back of the tipper . . . Took a lot of folding, I can tell you.’ Death is everywhere, all the time, on a farm. Farmers have no illusions about the capriciousness of nature and how life hangs by a thread, especially for those most accident-prone of animals, sheep. ‘If a sheep could, it’d die twice,’ says one. Bathurst tells us, ‘One nearby farm lost 80 lambs and all of that year’s profit in a twohour snowstorm which didn’t touch the neighbouring village.’ LIkEmany smaller, less profitable farms, Rise Farm gives an impression of ‘love and cheap repairs’, the old farmhouse hard to tell from the surrounding byres at first glance. at 800 metres above sea level the land is officially ‘marginal’ and good only for livestock. It’s farmed by Bert, well into his 70s, and his wife alison, and retirement is an unknown concept. Bert has 300 sheep and a not very good sheepdog called come Here, ‘ lazy, unfocused and addicted to sex’. He knows every field, every tree, every corner of his land, what it will do and what it won’t. Like many farmers he is simultaneously a mechanic, electrician, hydraulic engineer, accountant and tractor driver, and has been pulling lambs out of ewes for over 60 years. The author says she has ‘never met a group of people who worked harder’ than farmers. Bert once went on holiday for three days, to Pembrokeshire, but couldn’t remember much about it afterwards, except that he noticed they were behind with their silage round carmarthen. a farm isn’t just a farmer’s workplace, it’s his heart and soul. an office worker moving offices need only worry about the nearest decent coffee shop and whether it’s a longer commute. But the toughest of farmers may break down and cry the day they are finally driven by debt and poor health to sell up and leave. Bella Bathurst goes to one local farmer’s funeral. On the front of the order of service is a cross and a picture — not of the farmer but of his farmhouse. They love their work, for all the grumbles. In an age of entitled snowflakes, it’s salutary to read here of an older friend of Bert’s, Ron, born one of 12 children in a small nearby cottage. Three of his brothers died in World War I. When Ron was 14, he was taken out of school one day by his Dad. They walked a few miles to a neighbouring farm, and he was offered as labour. The farmer took one look at him, and a priceless exchange ensued. ‘B’ain’t very big, is it?’ ‘Big enough,’ said Ron’s Dad. ‘can it work?’ ‘Raised to it.’ ‘Seven shillings.’ ‘Eight.’ Ron went to work six-and-a-half days a week. ‘He slept in the hay barn and ate pork fat,’ and on Sunday he walked back to his parents and handed them his wages. Today’s farmers can’t even find people to pick strawberries. Field Work is heart-wrenching as well as dryly funny. The foot-andmouth epidemic of 2001 was so traumatic for many farmers, she thinks they view with some puzzlement today’s hysteria about Covid. They see death and disease all the time: scrapie, BSE, bovine TB. During that dreadful summer of 2001, ‘Ministry officials arrived on many farms in biohazard suits and shot everything on four legs. In many cases the corpses — and their unborn or newborn calves or lambs — were left for up to a week before collection.’ It left many farmers with something like PTSD, and years after there was still a spike in rural suicides on the anniversary. Urbanites were often callous or indifferent — why were the farmers so upset, when they were going to have their animals killed anyway sooner or later? — never understanding that the farmers had seen their entire life’s work wiped out in ten minutes of shooting. OUrremaining 180,000 farmers still provide over half the food we eat, and yet because we demand it so cheap, farming has to be intensive. In 1921, a pint of milk cost £3.50 in today’s money. If shoppers at Tesco demand milk for 40p a pint nowadays, then yes, cows will be confined inside vast automated barns, milked three times a day and never see grass or sun. Our choice. Bathurst visits a huge intensive chicken farm in Somerset, a horrificsounding behemoth of 470,000 chickens, raised from chicks to slaughterhouse in just 49 days. The farm is worth £8 million, and the farmer — or agribusinessman — spends three-and-a-half days a week on the computer. But as he says, consumers demand a whole chicken nowadays for £4. So this is the kind of industrialised farming, and countryside, that we get. Again, our choice. Don’t blame the farmer. As for smaller farms and old-style farmers like Bert, who possess such an irreplaceable store of knowledge of their own land, their crops, their animals — they are doomed to imminent extinction, and with them a whole precious way of life. Field Work is a superb testament to that way of life, and richly demonstrates what a terrible loss that would be — for all of us. 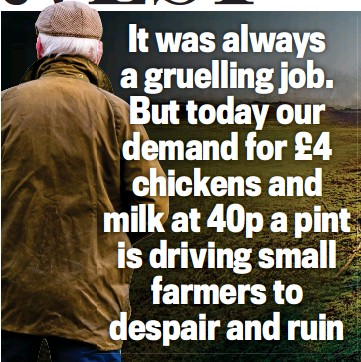 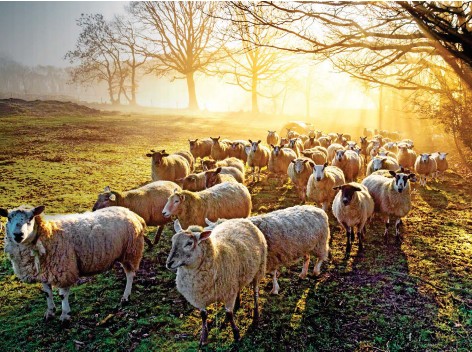