Somewhere in the latest blizzard of record high house price figures and the surge in sales triggered by the stamp duty holiday, one thing has been overlooked: the great North South divide is decreasing. A home is still far more expensive in London than middlesbrough, but the difference is diminishing. For example, Zoopla says house prices in the capital rose a meagre 0.3 per cent in the past year, whereas in middlesbrough they soared 10.06 per cent. And the same website reports that the country’s hottest housing markets right now are not in leafy Surrey or posh Central London, but in Yorkshire, humberside and the North-west, as the pandemic property world undergoes its own ‘levelling up’ exercise. It’s not just prices. The time between listing a home for sale and a buyer’s offer being accepted in the North of england is now three weeks quicker than in 2019, while the areas boasting the fastest sales are wigan, Barnsley and Burnley, claims Zoopla. Again, contrast that with London, where homes now take two weeks longer to find a buyer than in 2019. Nor is the trend likely to be a flash in the pan, with estate agency Savills forecasting that the Northwes t an d Yorkshire and the humber will lead UK house price growth with rises of 6.0 per cent in 2022 and 5.5 per cent in 2023. And by the end of 2025, Savills predicts the North west will enjoy an eye-watering 28.8 per cent rise overall. Across the UK, the average increase is set to be 21.1 per cent, while London stubbornly stays in the slow lane with only 12.6 per cent growth. ‘Some of the price rises we have seen were overdue; country prices had lagged well behind London for years and some re-balancing was required,’ says James Greenwood, managing director of the Stacks Property Search buying agency. There are exceptions to the rule; the biggest of all being Cornwall, where demand has reached a record high since the start of the pandemic. Tiny St mawes sits on the south Cornwall coast, lined with holiday homes and fashionable hotels such as the Tresanton and The Idle rocks. It has seen the biggest rise in average prices of any seaside town over the past year, jumping nearly 48 per cent from £339,912 to £501,638 — the largest rise in the ‘race for space’ as people have quit the big cities for countryside and coast. Can Cornwall keep this kind of appeal — and price tag — when homes in the north are still much cheaper? Josephine Ashby, of John Bray & Partners, one of the county’s top agencies, says: ‘Cornwall has always been popular for its incredible landscapes and coastline. There’s a limited supply of property but there’s a broad demographic of buyers, so we believe confidence will remain.’ however, when looked at in terms of the two halves of england, even that stellar house price rise in Cornwall isn’t enough to balance out the much more widespread increases in the North, according to rightmove’s Tim Bannister. he says: ‘It’s the regions of Britain further north that are leading the way. while the gap remains large, with average prices in London still 2.9 times higher than those in the North, this ratio is now at its smallest since 2013.’ And he continues: ‘So far 2021 is proving to be the year of the northern mover, not only satisfying their pent-up housing needs, but in doing so also narrowing some of the huge price gap with London.’ every house differs, but the office for National Statistics has a comparison table for how much every square metre of ‘ house’ costs in different parts of the country. So a square metre in London’s westminster costs £16,246, while in rugby it’s £2,081. In leafy winchester, it’s £3,910 but in Scarborough, a square metre of house would cost £1,567. And in east Devon, where there are plenty of holidays homes to inflate prices, you pay £2,605 for a square metre; in South Tyneside it’s a snip at £1,319. That means, obviously, that in most circumstances you get more space for your money if you head north and you get much less if you buy in the South. But things are changing — and fast. In recent months, the Government has announced that part of the Treasury will be based in Darlington and some officials from the ministry of housing and Communities will move from London to wolverhampton. Some of Channel 4 has moved to Leeds and hSBC and Amazon are locating some of their operations to manchester. The result will be that house prices in these locations will be rising soon. Thanks to our changing priorities and the pandemic, suddenly things appear much less grim up north. 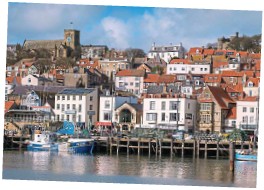