PETROLHEADS ARE BEING SENT TO COVENTRY — AND THEY’LL LOVE IT

COVENTRY UK CITY OF CULTURE 2021: FIND out what’s on where this year (­ coventry2021.co.uk). COVENTRY MOTOFEST IN JULY AND AUGUST: Dedicated to the city’s motoring heritage, the new MotoFest Month is the largest free motoring festival in the UK. It combines live motorsport displays, classic and performance vehicles, and brings the cutting edge of automotive innovation to the UK’s Motor City (­ coventry motofest.com). COVENTRY TRANSPORT MUSEUM: The museum houses the largest publicly owned collection of British vehicles on the planet. Its 14 galleries are home to the fastest vehicle in the world, pioneering bicycles, and many of the most innovative, memorable and luxurious vehicles of the past 200 years ( transport-museum.com). n BRITISH MOTOR MUSEUM: Located just off the M40 near Gaydon (where Jaguar Land Rover and Aston Martin are based), this archive houses the world’s largest collection of historic British cars, with more than 300 classic motors from the collections of the British Motor Industry Heritage Trust and the Jaguar Heritage Trust ( british motormuseum.co.uk). n TELEGRAPH HOTEL: Pay a visit to the former offices of the Coventry Evening Telegraph on Corporation Street — where I used to work and report on the motor industry — now imaginatively transformed into the Telegraph Hotel ( telegraph-hotel.com). 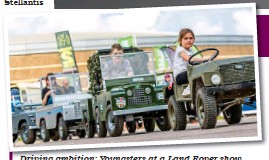