■ THE BOSS ROBERT PAGE PAGE has been deputising for Ryan Giggs for more than half a year now so the situation facing Wales isn’t like when Spain dumped Julen Lopetegui and appointed Fernando Hierro as interim boss two days before the 2018 World Cup. Hopefully, having had time to get used to being his national team’s No 1 rather than a No 2, Page can guide his team out of Group A. It might be a daunting prospect for the 46-year-old caretaker but given the circumstances he can only go and give it his all in this tournament. He’s got the talent at his disposal to do well. ■ THE STAR GARETH BALE ‘WALES. Golf. Madrid. In that order.’ That’s what that infamous banner said after Bale and his team-mates qualified for these Euros. Bale is the first name on Page’s team sheet, easily. On what was likely his last appearance in a Tottenham shirt and perhaps p his final game in the Premier League, Leag Bale (left) came off the bench to score twice against Leicester. He turns 32 next nex month but is still capable of turning on the th magic. At Euro 2016, Bale scored in every e group game as Wales made it all the t way to the semi-finals. Page will be saying: ‘Same again, please!’ ■ SUTTON’S VERDICT GIGGS’ court case is casting a significant shadow s over the side. You can only hope all a of that background noise doesn’t prove pr too much of a distraction for the players. play With Aaron Ramsey, Daniel James and Co, C Wales have enough talent to make it to the th knockout stages. Whatever motivation Bale B l supposedly lacks in representing Real Madrid, he makes up for when in that Wales shirt. If he can turn it on, then Wales can enjoy another exciting Euros. 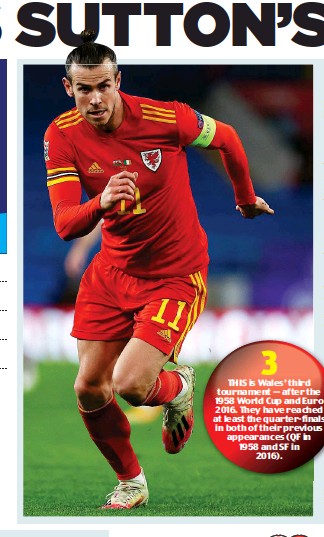