As if to demonstrate that pop is a game of fine margins, New Rules, Dua Lipa’s excellent three-point manifesto for heartbroken girls, was the sixth single to be pulled from her debut album, but it thoroughly revived the enterprise and made her the woman to watch. The Kosovan-albanian Londoner promptly hammered her advantage home with One Kiss, another multi-platinum girl-boosting anthem, recorded with Calvin Harris, and now for album two. Future Nostalgia doesn’t attempt to recreate New Rules’s twisty tropical house, but it does place some safe bets on pacy, Eighties-flavoured dancefloor pop (Physical), Kylie-ish nouveau-disco (Break My Heart) and irresistible, Moloko-style holiday nightclub grooves (Don’t Start Now), all sprinkled with crowd-pleasing modern-girl feminism. For its first nine songs, in fact, Future Nostalgia feels like a minor classic of effortlessly likeable, to-the-point dancefloor pop. Only the final two – the jaunty Maroon 5 stylings of Good In Bed and heavy-handed attempted show-stopper Boys Will Be Boys – feel like they break the spell, and by then Future Nostalgia has long since done its Dua-consolidating job with ease. 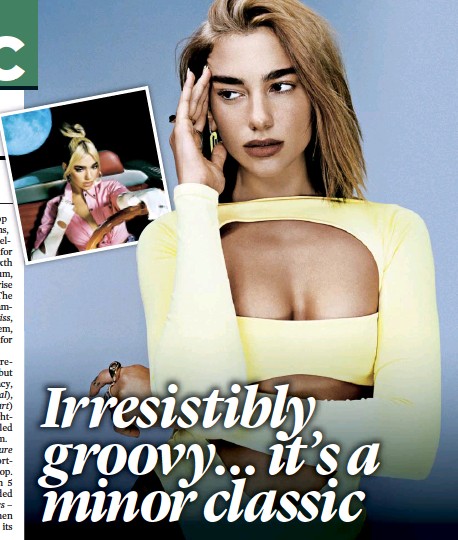