There is good old-fashioned rivalry in football, and then there were the battles between two of the Premier League’s most fearsome enforcers, Arsenal’s Patrick Vieira and Manchester United’s Roy Keane (above). Here, they glare at each other once more as they recall their feisty encounters down the years. 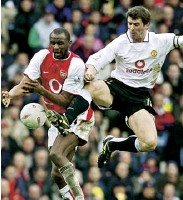