TANTRIC SNAKES AND LADDERS, ANYONE? Based on the game called Moksha-patam, often used in India for Hindu religious instruction, this represents the journey of a soul through life with virtues (ladders), which are rewarded, and vices (snakes), which are punished. Intriguingly, not much is known about this 4,000-year-old toy mouse, which is from the banks of the river Nile. The mind boggles to think of who this little creature once belonged to. Punch and Judy puppet shows were often a way of relaying information to the public and satirising the news. Lampooning villains was popular and by 1939, there was no bigger villain than Hitler (above right). YOU’RE BEING WATCHED… ‘Yes, she is a little creepy,’ Jack says of Caroline the doll (left), who dates back to 1822. She has a wax-over-papier-mâché head and a stuffed rag body. The doll on the right, from 1825, can move her eyes. 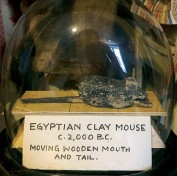