MAKES 4 SMALL PIES PREPARE: 20 MINUTES COOK: 15-20 MINUTES 150g spinach, washed plain flour, for dusting 500g block of puff pastry (remove it from the fridge 20 minutes before needed) grated zest of 1 lemon 150g cream cheese 1 tbsp finely chopped chives salt and pepper 350g skinless salmon fillet, cut into 4cm cubes 1 egg, beaten 1 tbsp white sesame seeds – optional 1 tbsp nigella seeds – optional ★ Preheat the oven to 200C/180C fan/gas 6 and line a baking tray with baking parchment. ★ Put the washed spinach in a microwaveable bowl, cover and zap on high for 2 minutes or until well wilted, or wilt it in a dry pan. Place the spinach in a sieve and press it with a spoon to remove as much water as possible. Roughly chop and leave to cool a little. ★ Dust a clean work surface with a little flour and roll out the pastry into a large square about the thickness of a pound coin. Cut the square of puff pastry into quarters to form four smaller squares. ★ Mix the cooled spinach in a bowl with the lemon zest, cream cheese and chives, and season with a little salt and pepper. ★ Place the pastry squares on the lined tray and divide the cream cheese mixture and cubed salmon between the four pieces of pastry, placing it towards the edge of one corner of each of the squares. ★ Use a pastry brush to brush the beaten egg around the edge of each pastry then fold the opposite corner of pastry over the filling to form a triangular shape. Press the edges together with a fork and brush the tops with more egg. ★ Sprinkle the tops of the pies with the seeds (if using) then bake in the oven for 15-20 minutes until golden brown and cooked through. ★ Remove from the oven, let them cool a little (so the pies aren’t too hot for little hands) and serve. 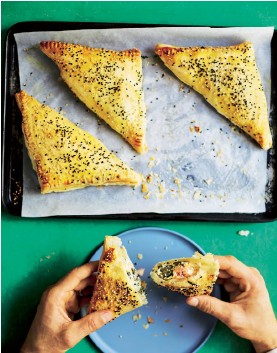