Oh to be in England, now that spring is here. Well, sort of. Despite sitting in the most idyllic of Oxfordshire pub gardens, all crowing cockerels, luxuriantly green grass and lusciously blooming orchards, there’s always the small matter of the weather. Dull at first, with sulky clouds, then a brief spell of brilliant sunshine, followed by an Old Testamentstyle deluge. All in the time it takes to sink a pint of Hooky Ale. But The Swan Inn at Swinbrook, pretty much in the shadow of St Mary’s church, a Norman beauty in whose graveyard most of the Mitfords are interred, is one of those country pubs that does the country pub thing perfectly, with minimum fuss. Decent draught local beer, a short but well-priced wine list. And a menu that takes in all the pub classics, plus a few local, seasonal things without ever banging on about their being local and seasonal at all. So a starter of steamed asparagus, topped with a perfectly fried egg, the egg laid by one of the chickens scratching around the garden. A little bit of Pecorino adds saline bite, and a few blobs of pesto an Italian wink. Another starter of roast beetroot with whipped goat’s curd is hardly revolutionary but with salty olives, sharp shards of preserved lemon and a scattering of pomegranate seeds, is light, lithe and well put together. Quietly confident cooking with no lectures about provenance or chef’s philosophy, or how the cutlery is foraged from the local garden centre. When it comes to pub Sunday roasts, I tend to steer clear. However fine they may be, nothing compares to those cooked at home. Here, pork comes with a brittle, caramel carapace of crackling, the succulent flesh tasting of a life well lived. Decent gravy, decent roast potatoes and all sorts of vegetables. More than respectable. But I devour the fish and chips, great fat flakes of cod enclosed in the most crisp and beautifully burnished of batters. Fries replace the more traditional chips, but that’s fine. I’ve now had a couple of glasses of cold Picpoul, and the small details matter less. As the sticky toffee pudding arrives, the pitter-patter of rain turns to a downpour so intense that conversation becomes tricky. But we’re under umbrellas, and we’re English. It is May after all. About £25 a head. The Swan Inn, Swinbrook, near Burford, Oxfordshire OX18; theswanswinbrook.co.uk 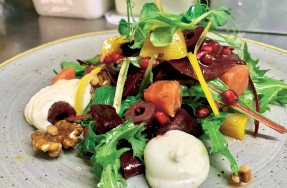