PICK OF THE DAY 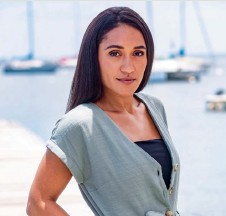 DEATH IN PARADISE 9PM, BBC1 ★★★★ Could this be the last we see of DS Florence Cassell (Josephine Jobert, right)? The show favourite has to make a big decision about her future, and the Commissioner is pushing her on that undercover job in Jamaica. Surely, she couldn’t bear to leave poor Neville behind, could she? Meanwhile, on Saint Marie, the team are busy trying to solve one of their most baffling crimes yet. How was a skydiver stabbed in midair with nobody around him? There’s a long list of suspects, though, who certainly had reason, if not opportunity… MONTY DON’S ADRIATIC GARDENS 7PM, BBC2 ★★★★★ Monty begins the last leg of his journey on Corfu, a Greek island with strong links to Venice. There he meets up with the widow of the English writer Gerald Durrell, who gives him a guided tour. Next, he travels to Greece’s capital, Athens, and the place where the study of botany began. WOULD I LIE TO YOU? 8PM, BBC1 ★★★★ Rob Brydon is back in the host’s chair for another round of the funniest panel show on TV. Joining captains Lee Mack and David Mitchell this week are singer Sophie Ellis-bextor, comedians Jason Manford and Loyiso Gola and the former Great British Bake off contestant Briony May Williams. KATE HUMBLE’S COASTAL BRITAIN 8PM, CH5 ★★★ In this third episode, Kate walks a rugged and scenic route along Ayrshire’s coast, the birthplace of Scotland’s National Bard, Robert Burns. After paying homage to Burns’s most famous poem, Tam O’shanter, she heads to a family farm that produces a historic ‘early’ Scottish potato, the Ayrshire Epicure.