MY LIFE & OTHER CELEBRITES

You’re Dead To Me History podcasts needn’t be fusty or soporific, as the author and presenter, Greg Jenner, proves on this wonderful show. On every 50-minute episode, Jenner teams up with an expert and a comedian to whizz through an era or figure of note. The most fascinating episodes are on Napoleon and the European ‘witch craze’ of the 15th and 16th centuries, but they’re all great. He’s funny, too. Thumbs up. Fortunately… with Fi and Jane There’s nothing quite as reassuring as listening to the chit-chat of friends and broadcasters Fi Glover and Jane Garvey. On every 45-minute episode, they interview a celebrity guest and shoot the breeze about whatever occurs to them. Episodes are now being recorded remotely but its is just as good and warming as ever. Past guests have included Kirsty Wark, Radio 2 DJ Sara Cox and Gyles Brandreth. The Coronavirus newscast This daily podcast reunites the old gang of BBC reporters who presented last year’s hit Brexitcast. The tone is perky but the content is serious, and the podcast is beginning to secure fun guests, too. Nigella Lawson (below) recently came on to dish out cooking advice and pop star Charli XCX cropped up to let everyone know she’d been painting rocks to pass the time. evil Genius This thoroughly entertaining podcast hosted by comedian Russell Kane asks whether it’s acceptable to like the art or actions of people who were ‘bang out of order’. On each half-hour episode, Kane is joined by an eclectic panel to weigh up a famous figure’s achievements, and decide whether they eclipse the bad things they said or did. At the end, there’s a vote. So far Oscar Wilde and Picasso have been declared geniuses but, surprisingly, Enid Blyton has been deemed ‘evil’. Great fun and consistently enlightening. The Missing Cryptoqueen In 2014, just as the dawn of cryptocurrency was making headlines around the world, an Oxford-educated glamazon called Dr Ruja Ignatova launched her own currency to great fanfare. Onecoin looked legit; investors loved it, and within two years, millions had sunk millions into the company. Then Ignatova vanished. This addictive series, brilliantly presented by the tech journalist Jamie Bartlett, explores the scam that looked like a financial revolution. 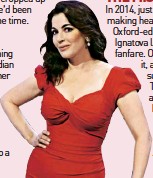