With 12 children, the Galvin family of Colorado were always going to be notable. Their ten boys and two girls (born between 1945 and 1965) were accomplished in sports, school and music, and always smartly dressed when the family went to church. Father Don had an admirable military background. Mother Mimi was a devoted homemaker. Both had a public-spirited dedication to the arts. If the American Dream existed anywhere, then the Galvin home on Hidden Valley Road might be the place. But, true to the name, the surface was not the whole picture. Beginning in the mid-sixties, six of the Galvin boys in turn were diagnosed with schizophrenia. One researcher said the Galvins ‘could be the most men lives were littered with the most appalling acts, with girls and women often the victims. The available treatments were ineffective, or came with dreadful side effects, or (in the case of therapy that claimed mothers caused the illness) sometimes just cruel. But as terrible as the Galvins’ situation was, it also offered hope for those trying to make sense of the disease. A family as large as this one, with so many sufferers, provided an incredible resource for exploring the genetic origins of schizophrenia. Could the Galvins help to settle the nature/nurture question? Hidden Valley Road tells two stories with care and compassion: first, the story of the Galvins, and second, the story of efforts to understand schizophrenia. The latter is a story that exposes the best and the worst of medicine. Progress in treating or preventing schizophrenia has been held back by the complexity of the disease, inflexible researchers and drug companies reluctant to invest in a cure that may not be profitable. On the flip side, there are those who kept on working regardless of the difficulties and whose discoveries could help other families like the Galvins. This grippingly told and brilliantly reported book is also a tribute to the relationships that helped to hold them together. ‘We are human,’ writes Kolker, ‘because the people around us make us human.’ tally-ill family in America’ – still notable but in a wholly unwelcome way. Few diseases are as frightening as schizophrenia, which has been sorely abused by horror-movie ideas of the split personality. But, explains Robert Kolker, the split isn’t within the affected person but between them and the world: ‘It is about walling oneself off from consciousness, first slowly and then all at once, until you are no longer accessing anything that others accept as real.’ Surrounded by delusions, life in the Galvin home was often disturbing, especially for the two young girls: it is not easy to grow up with an older brother who prays to you as the Virgin Mary. And it was violent. The expected roughhousing between so many boys tipped over into something much worse, and the Galvins’ 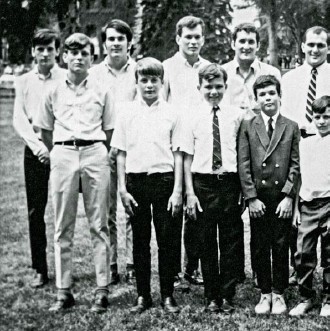 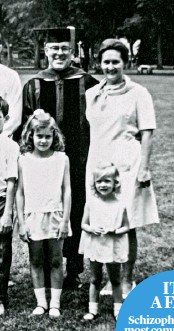