In which I object to being called a bully

Why do we only remember – in my case chew over, endlessly – the bad reviews? I’m still smarting over one from the late 90s that said my book was ‘poor’. I don’t reread lovely tweets, only the ones that state I’m a ‘horrible bully’. ‘Am I?’ I wondered in a panic when I read that one. The tweet landed the second after a sentence had been uttered on TV, during the Amy Winehouse documentary, A Life in 10 Pictures. One of the late singer’s best friends said that a turning point for Amy’s mental health was a headline in a tabloid: ‘Amy Decline-house’. It turns out I had written that piece. Having received the tweet, accusing me of effectively killing the star, I feverishly googled the article. It was published in 2007. There indeed was that heading, with a shocking photo of the singer. But I hadn’t been mean at all. I had asked why no one helped Amy, while acknowledging how impossible it is ever to save an addict (I should know, with a sister and sister-in-law who both died from alcoholism). I predicted that if no one helped Amy, she would be dead by the age of 25. I was just two years out. So, the person who attacked me hadn’t read the piece. I didn’t write the headline: columnists have no say on what we call, in the trade, ‘the furniture’. But being called a bully upset me. As a columnist, it’s a conundrum. The defence when writing critically about others – boyfriends, husbands, family, celebrities – is that it’s all true. They shouldn’t do bad things – shouldn’t cheat, or call you the C-word, or get an ecstasy tablet out of their wallet in front of YOUR BOSS at dinner, or demand to be reimbursed for a £25 book on barn conversions when you’ve just bought them a house. Men shouldn’t date a columnist if they’re going to be precious. For any writer, the personal always seeps into the copy. If it doesn’t – if you remain invisible and spare anyone close from having their gory details exposed – you are short-changing the reader, and are, to be frank, bloody boring. Another writer got eviscerated after that Amy documentary: an award-winning (it’s not just me!) interviewer who had played paparazzi for the day, chasing Amy down the street. She once wrote a moving memoir about losing the father of her children: he drowned. And she has written about her own cancer. So, should she not have written about his death, her illness, or Amy – whose multimillion-selling second album, Back to Black, was entirely about her exboyfriend? Of course she should! Such writing isn’t just about selling papers or records, it’s about making others feel less alone. It’s about them being able to realise, ‘Ah! So, life isn’t all about renovating Georgian houses and what shoes you wore for your perfect wedding and children frolicking in heritage orchards’. Sometimes life is horrible and embarrassing! I’ve been messaging with the vegetarian photographer who asked me out. He’s sweet, funny, intelligent. Not patronising or competitive. Not lewd, but flirty. It’s been fun. I’ve had something to look forward to. But my ex-husband’s piece in The Telegraph shook me, so I’ve decided to cancel our date. The photographer doesn’t deserve what will inevitably happen. I will make some excuse; say I’ve been told not to drive due to my vertigo attacks (someone on Twitter said they were reporting me to the police; thanks! Dear Lord, I’d love some privacy). If he offers to drive to me, then what? If I say, you won’t enjoy being written about, he will say what they all say at the beginning. When I first met my future husband, he’d chirrup, ‘I quite like my high-profile naughtiness.’ The ex said, ‘Publish and be damned,’ only to change his mind later. But when they do, inevitably, behave badly, then it’s my job to tell you. Anything else would be dishonest. You deserve the highs and the (frequent) crashing lows. Because your lives are like that. You don’t live in a fictional world of happy families and orchards, the only conundrum which Farrow & Ball colour to choose. And neither, sadly, do I. 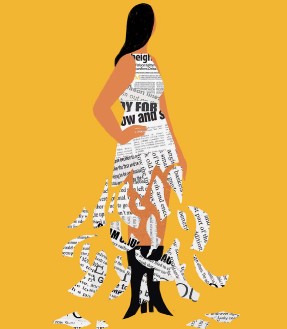