China stokes tensions as it vows to take back Taiwan

CHINA’S President Xi Jinping escalated tensions with Taiwan yesterday after declaring that ‘reunification’ with the island ‘must be fulfilled’. The Communist leader said reunification should be achieved peacefully, but warned that the Chinese people have a ‘glorious tradition’ of opposing separatism. While Taiwan considers itself an independent state, China views it as a breakaway province and has long sought reunification. In a series of deliberate provocations, China flew almost 150 aircraft, including fighter jets and bombers, towards Taiwan over a four-day period this month. Taiwan’s defence minister has said military relations with China are at their worst in 40 years. Speaking yesterday at an event marking the 110th anniversary of the revolution that overthrew China’s last imperial dynasty in 1911, Mr Xi said reunification in a ‘peaceful manner’ was ‘most in line with the overall interest of the Chinese nation, including Taiwan compatriots’. But he added ominously: ‘No one should underestimate the Chinese people’s staunch determination, firm will, and strong ability to defend national sovereignty and territorial integrity. ‘The historical task of the complete reunification of the motherland must be fulfilled, and will definitely be fulfilled.’ Meanwhile, an editorial in the Global Times, a Chinese state media outlet, condemned Washington following reports that US special operations and support troops have been secretly training military forces in Taiwan for at least a year. ‘The mainland must respond to the US’s new provocations to make both Washington and the island of Taiwan fully realise the severity of their collusion,’ the article declared. ‘We must let them know they are playing with fire to provoke a war and the consequences their acts will bring are unbearable to both the US and Taiwan island.’ Shortly before Mr Xi spoke in Beijing, Taiwan’s premier Su Tseng-chang accused China of ‘flexing its muscles’ and stoking tensions. The spat comes as aircraft carrier HMS Queen Elizabeth undertakes a joint exercise with two US carriers and a Japanese helicopter destroyer in the Philippine Sea. 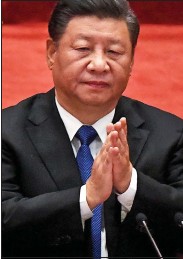