Talking China with Henry Kissinger, singing Simply the Best in a gay nightclub, why Liz is the new Tory darling

SINCE becoming Foreign Secretary, Liz Truss has debated the legacy of Chairman Mao with Henry Kissinger and sung Simply The Best in a Manchester gay club in the space of barely a fortnight. The ease with which Ms Truss can switch between the gears – try to picture predecessors such as Peter Carrington or Douglas Hurd belting out the Tina Turner classic – is one of the reasons she became the star ministerial turn at last week’s Tory Party conference. As she swept from packed-out fringes to boozy networking dinners and late-night parties, the Foreign Secretary was mobbed by political groupies who admire the way she markets her brand of hard-headed neo-Thatcherism to a new generation of Tory voters. While some Cabinet colleagues sniff that Ms Truss is a socialmedia-obsessed ‘narcissist’ who cares more about recruiting an ‘Instagram adviser’ than one on foreign affairs – ‘more Jimmy Carr than Jimmy Carter’, in the words of one wag – she is now a clear rival to Chancellor Rishi Sunak for the post-Boris succession. As she was out partying – having FaceTimed her two teenage children at home in London to say goodnight – a worn-out Mr Sunak was in his hotel room, working out how to explain in his Budget this month why, thanks to this Government, Britons are facing the highest tax burden since the 1940s. Ms Truss was one of the few Ministers to speak out in Cabinet against the rise in National Insurance to fund a new health and social care levy, arguing that it was ‘fundamentally un-Conservative’ and a clear breach of a manifesto commitment. Mr Sunak privately agrees, but has had to muffle his opposition out of pragmatism, and now risks taking a hit to his political ambitions. Mr Sunak knows to beware. Behind Ms Truss’s mischievous, innuendo-laden persona lies a more calculating mindset, and she is keeping a close eye on the ‘ups and downs’ of ministerial fortunes. Ms Truss knows who her friends in Cabinet are – Business Secretary Kwasi Kwarteng has been a longstanding ally – but has an even clearer idea of the enemies. ‘Liz has never trusted Michael [Gove] and never will,’ says a friend. During her previous job as International Trade Secretary, she also clashed with the pro-farming lobby, led by Zac Goldsmith, who worried about the effect on the British agricultural industry of lower-priced, lower-quality imports from countries with which she struck deals. The Foreign Secretary is a ‘hawk’ on China, determined to counter Beijing’s growing dominance with security pacts such as the AUKUS submarine alliance with America and Australia, and by setting up a British rival to China’s Belt and Road programme of global investment. Mr Kissinger, 98, served as Richard Nixon’s Secretary of State during Washington’s attempt to open up relations with Beijing through a trip to China to see Chairman Mao in 1972. Ms Truss met Mr Kissinger during her visit to America with the Prime Minister last month. After he had regaled her with his experiences, the pair swapped email addresses. The only hiccup so far has been access to Chevening, the graceand-favour country home in Kent which is usually made available to the Foreign Secretary. Ms Truss has not yet been handed the keys by Mr Johnson because he is trying to soothe the bruised feelings of her predecessor, Dominic Raab. He was demoted to Justice Secretary while being simultaneously promoted to Deputy Prime Minister – and hopes to keep the house. ‘Liz agrees with the Prime Minister that such fripperies are unimportant,’ says the friend, unconvincingly. In her additional portfolio as Minister for Women and Equalities, Ms Truss, 46, has become embroiled in the woke wars of Whitehall after she argued in meetings that Ministers should pull out of the Diversity Champions scheme run by the Stonewall charity – under which employers pay the charity for advice on how to implement equality laws and policies – after Stonewall chief executive Nancy Kelley likened ‘gender critical’ beliefs to antisemitism. Ms Truss’s stance was opposed inside No10 by younger advisers, such as Henry Newman, a friend of the Prime Minister’s wife Carrie, who urged restraint on the grounds that the charity had a laudable history in battling discrimination against homosexuals. Some sceptics interpreted Mr Johnson’s move to put Ms Truss in the Foreign Office as an attempt to keep her out of the domestic limelight, away from adoring local associations, to preserve his own pre-eminence: she will soon be hopping on a plane to Asia to try to forge new counter-Chinese alliances with countries such as Indonesia. While a trip to Beijing is unlikely, a historic visit to Moscow for talks with Vladimir Putin is not ruled out. But however many time zones she manages to cross, based on her performance so far, Ms Truss will not be easily stifled. 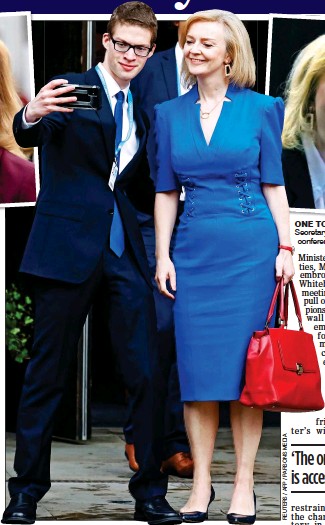 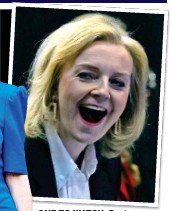