Crisis at the pumps... and over pipeline

PETROL and diesel prices have risen sharply in Germany in recent weeks, right, as have natural gas prices, impacting industry. Its regulator is expected to certify the controversial Nord Stream 2 gas pipeline from Russia to its northern coast within weeks, which may ease the crisis but risks a major EU rift. Russia’s President Vladimir Putin has been accused of stoking the crisis by ‘weaponising’ his country’s vast gas reserves. Other EU states are considering breaking climate pledges and turning to coal to ease the crisis. France, Spain and Italy last week urged Brussels to take action. 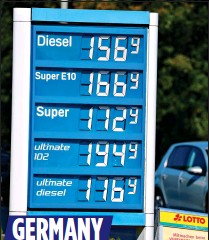