Looking more of a smoothie than ever – has Becks had a tweak like his friend Gordon?

DAVID BECKHAM always seems happy in his own skin – but fans are starting to wonder if that might be because he’s had a little external help. The football legend has previously vowed never to undergo cosmetic surgery or use Botox – but recent photographs of the 46-year-old appear to show him with a much smoother forehead than before. Observers also spotted that the crow’s feet around his eyes appeared less pronounced, prompting speculation that he has had work done like his famously craggyfaced friend Gordon Ramsay. After seeing pictures from a recent awards ceremony, one fan tweeted: ‘David Beckham step away from the Botox!! Growing old gracefully is far sexier!’ Another wrote: ‘David Beckham’s had Botox and it’s not settled well at all.’ A spokesman for the former England football captain declined to comment, although a friend insisted that he had not undergone any cosmetic surgery. However, Dr Julian De Silva, a Harley Street cosmetic surgeon specialising in facial work, said: ‘I don’t see a lot of movement in his forehead and there are some photos where he has no lines at all. ‘His brow looks to have dropped and this can occur with natural ageing or excessive Botox. It looks like dermal fillers have made his cheeks more lifted and fuller. ‘In previous photos, his face looked thinner, and a common feature of ageing is losing natural fat in your cheeks.’ Speaking in 2018, Beckham insisted he wouldn’t consider using any kind of Botox or filler, saying: ‘Cosmetic surgery might be OK for some people; I’m not saying it’s bad. But for me, personally, never. Never! I have no interest in doing anything like that, ever. Growing old gracefully is my thing. I would never inject my face. Or my backside, obviously.’ TV chef Ramsay previously admitted to smoothing out his wrinkles, saying: ‘The lines were pretty horrific, like Scarface. I was never embarrassed by it, but my children helped me become more paranoid about it. I woke up in the morning and [daughter] Matilda was trying to squeeze pound coins in there.’ 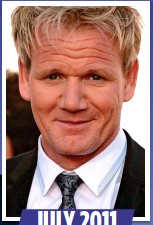 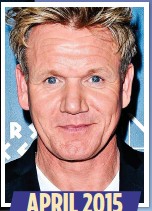 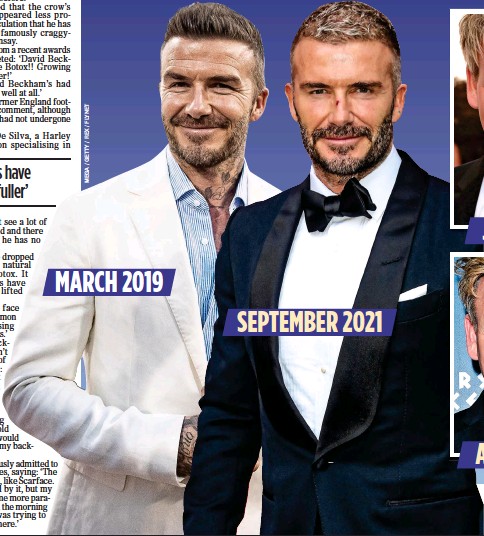