A NEWBORN baby was rescued by lifeboat yesterday only hours after French police were filmed watching dozens of migrants launch dinghies to cross the Channel to Britain. The group of officers watched as two boatloads of migrants – about 80 people – set off from shore in broad daylight. A film crew and reporters from Sky News approached the officers on Friday and asked why they were failing to stop the boats. One is reported to have explained that there were just nine of them compared with 80 migrants on the beach, pointing to the fact they were outnumbered. The reporters said they also contacted the French coastguard, while a helicopter hovered overhead, but authorities took no action to stop the migrants crossing. The launches, from near the French village of Ambleteuse, south-west of Calais, were among several, carrying up to 100 migrants, that crossed the Channel on Friday after ten days of bad weather deterred crossings. Dozens of migrants were also spotted arriving on the Kent coast yesterday, including the baby girl, aged between two weeks and a month, who was rescued by an RNLI team after nine hours at sea. The baby, named Ayyan and wrapped in a blanket, was handed to a police officer on the shore in Dungeness, Kent. Those who spoke to reporters said they had travelled from Iraq and Iran. One migrant claimed French police had also watched them leave the coast of France. Conservative MP Tim Loughton, a member of the home affairs committee, said: ‘This is further evidence that the French authorities are not serious about stopping migrants illegally coming across the Channel courtesy of criminal gangs. It is clear they are not serious about tackling this problem.’ Natalie Elphicke, Tory MP for Dover, said: ‘It beggars belief that the French police stand idly by and watch people launch into the increasingly choppy and wintry seas. It risks lives and is simply not good enough. ‘The surge in crossings was widely expected this week. The French should have had more police on patrol to stop the boats.’ Over 17,200 migrants have crossed the Channel in small boats this year, more than double the 8,420 who crossed in 2020. Home Secretary Priti Patel has repeatedly vowed to stem the flow. It can be revealed that she is planning to introduce new powers to allow Britain to impose visa sanctions on countries that refuse to take back failed asylum seekers or foreign national offenders. Ms Patel will introduce an amendment to the Government’s Nationality and Borders Bill as it makes its way through Parliament. A Whitehall source said: ‘All countries have an international obligation to take back their own nationals if they have no right to be in another country.’ 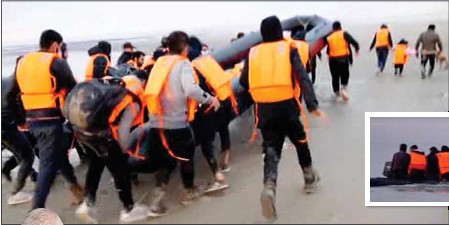 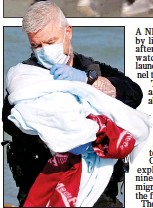