Friends in high places... they can be such a bore

WE’VE all done it – or at least most of us have at some point in our lives: made friends with someone we come to wish we hadn’t. The Royal Family are worldbeaters on this one. Prince Andrew made a rotten judgment call when he cosied up with Jeffrey Epstein all those years ago and, although not in the same league, the Queen would probably rather not have her Windsor teas with Sheikh Mohammed bin Rashid al Maktoum playing such a key part in last week’s revelations about the Dubai ruler’s phone-hacking habits. The term ‘friend’ covers a wide spectrum. I doubt the Queen regards the Sheikh as a bestie, but her closeness to the ruthless Emirati ruler is more than a passing acquaintance and is rooted in their shared love of racing. He’s given her winning horses. She invites him to the Royal Box. We often allow someone who shares our passions a bit more licence than someone who doesn’t. Even though it appears that Her Majesty has been recalibrating her relationship with the Sheikh after his supposed abduction of not one but two daughters, breaking up with friends is tricky. It’s not as clear-cut as breaking up with a partner where the relationship is specific. Friends can lurk in the corners of our worlds. Most of us will have made friends with someone simply because they were there. The friendship made sense in a specific time and place but, often, like pottery you buy on holiday, they don’t travel. Get it home and it looks totally out of place. The same with friends. For a while you feel loyal. You know why you liked them even if no one around you can understand it. But you don’t have to have become close to an abuser of young women or a threatening abductor to eventually decide a certain friendship has run its course. You may just see the light and realise that all around you were correct in regarding them as a bully or a manipulator or a witch. More often it’s less dramatic and you realise they are, and may always have been, just a terrible bore. And nothing is as lethal to a friendship as boredom. 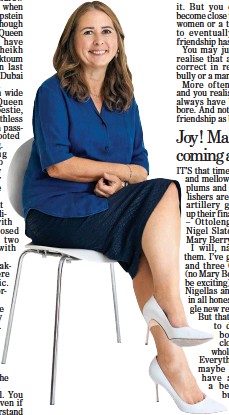