I envy Adele. Women of my generation have never dreamt of putting our own desires first...

ADELE burst back into our lives last week, and boy does that girl know how to make an entrance. Not just the front cover of Vogue, but simultaneous US and UK editions, looking utterly sensational, a true showstopper of transatlantic proportions. Her transformation from North London teenager into fully fledged LA diva is now complete. She was always beautiful, of course; but now that – thanks to thrice-daily workouts – she also possesses the requisite figure for high fashion, her allure takes on a whole new dimension. But striking as it is, it wasn’t her appearance that caught my attention. It was what she had to say about her life over the past few years, and about the various decisions she had made, including leaving her husband and the father of her son. ‘It just wasn’t… It just wasn’t right for me any more,’ she told Vogue. ‘I didn’t want to end up like a lot of other people I knew. I wasn’t miserable miserable, but I would have been miserable had I not put myself first. But, yeah, nothing bad happened or anything like that.’ Wow, I thought. Now there’s a novel concept. A woman not trying to make excuses for putting herself first. A woman who has decided that just because she’s not ‘miserable miserable’, or that nothing bad has happened, that’s not a good enough reason to carry on. A woman not trying to blame anyone, but owning her decision openly and honestly. For Gen X women like me, that is pretty revolutionary. The idea that you would not just put up and shut up, that you would in any way feel yourself entitled to a degree of happiness, of self-fulfilment, is, in many respects, wholly alien. To hear someone like Adele – the quintessential millennial – so openly admitting otherwise is both novel and, in a funny kind of way, rather subversive. It underlines the gap between our two generations, and how far things have moved on. It stirs quite a lot of emotions, too. Admiration, but also a dash of disapproval and more than a sprinkling of envy. For here is someone who not only appears to have it all in terms of looks, talent and fortune; she also seems wholly unapologetic about it all. This is something my generation of women has never quite managed. We’ve always felt rather guilty about pursuing any sort of personal success or fulfilment. For us, the idea of putting our own desires and wellbeing before that of others in our lives is, in many ways, anathema. This is particularly true when it comes to relationships. When I look around me, at my friends and family, there are only very few women I know who are truly happy. It’s not that they don’t love their partners, or their kids, or even the parents they now find themselves also looking after. It’s not that these things don’t bring them joy, or fulfilment. It’s that they do so at such a cost to their own identities it’s hard to see the edges of their own existence. As women, we lose ourselves as we get older. We become soft and blurred, not just as our hair fades and our jowls soften, but as our personalities, our desires, our ambitions, our hopes and dreams become subsumed by the needs of others. We have so little time to ourselves we forget who we are, or were, defined only by the demands of others. Living not the life we’ve deliberately chosen, but the one that’s left over after everyone else has had their turn. But too scared to budge, too exhausted to break free, and often too frightened to do so. And ashamed of our own feelings. As Adele herself put it: ‘I was embarrassed. I was really embarrassed. That thing of not being able to make something work. We’ve been trained as women to keep trying, even by the movies we watched when we were little. At the time it broke my heart, but I actually find it so interesting now. How we’re told to suck it up.’ The Adele on the cover of Vogue is not just a beautiful, successful, talented woman. She’s also an example of what any woman can be if she just has the courage to trust in herself. To say, without guilt or embarrassment, ‘What do I want?’ And to just go out and get it. 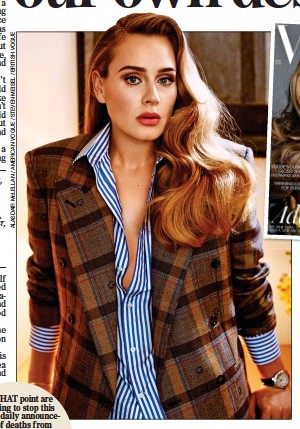