No time to dine... It’s lunch on the go for Miss Moneypanini

IT’S great to see a Bond actress get the chance to sink her teeth into a substantial roll or two… Naomie Harris may currently be starring as Miss Moneypenny in No Time To Die, but her lunch last week was hardly the stuff of 007 glamour – in fact you could call her Miss Moneypanini. Rather than choosing one of the swanky restaurants in the North London enclave where she was taking a stroll, the 45-year-old opted for lunch on the go, left, tucking into a crepe followed by a sandwich. The star – in jeans, biker boots and a chic black cape for the outing – was taking time out with her partner of ten years, Peter Legler. And she has certainly earned her downtime. Not only does Ms Harris star opposite Daniel Craig in No Time To Die, which shattered box-office records by grossing £88million worldwide in its first four days on release last weekend, she can also be seen alongside Tom Hardy in Venom: Let There Be Carnage. She plays the villainous Shriek in the Andy Serkis-directed superhero movie, currently top of the US box-office box charts. 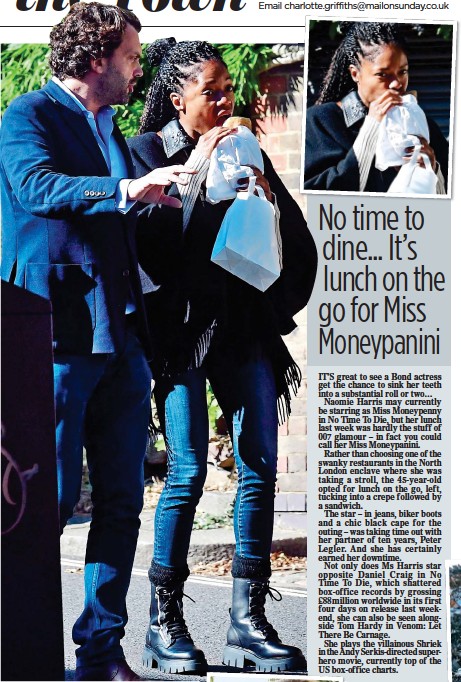