SCENES FROM A MARRIAGE

NEW MINI-SERIES Classic remake... but don’t expect a happy ever after! A forensic portrait of a troubled relationship, the classic original 1973 Swedish TV series was written and directed by one of cinema’s all-time greats, Ingmar Bergman, and starred his muse and sometime romantic partner Liv Ullmann. According to popular myth, it sent divorce rates rocketing by inspiring unhappy wives to confront their partners about their own marriages. This new five-part adaptation, starring Jessica Chastain and Oscar Isaac (left) as an American couple, is compelling and features terrific performances – Chastain and Isaac have incredible, combustible chemistry, but no one would ever confuse it with an out-and-out laughfest. It makes The Affair look like a light-hearted, feelgood comedy. Marriage counsellors have been placed on standby and all leave has been cancelled. NOW, from Monday 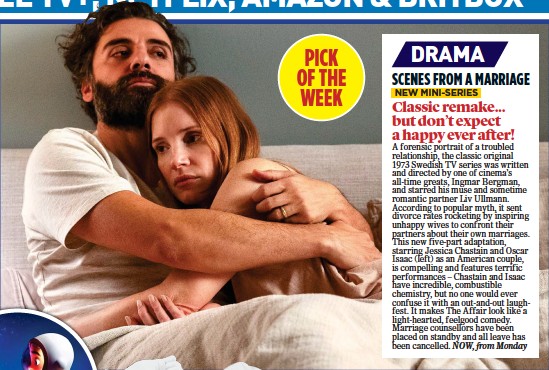