ANDY MURRAY was celebrating not just the return of his wedding ring, but an excellent win to put him in the third round at Indian Wells. The 34-year-old defeated Frenchman Adrian Mannarino 6-2, 6-3, and now has a match against Spanish teenager Carlos Alcaraz. Murray had lost his wedding ring after forgetting to remove it from the shoelaces of his tennis footwear, which he had left under his car outside his hotel because they were so smelly. After beating Mannarino he explained that they turned up at the hotel’s lost and found. ‘I was going to file a police report to increase my chance of getting them back,’ he said. ‘I spoke to the hotel and explained what I was going to do. About an hour later, the shoes turned up! One of the employees at the hotel found them in their lost and found.’ He added that his wife Kim had been understanding about the missing ring. ‘My wife’s pretty laid back with that stuff.’ 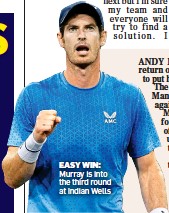