AT least one figurehead of English cricket enhanced his reputation this week. It is fair to say it might have been the most authoritative one of Joe Root’s Test captaincy. As the severance of Ian Watmore’s underwhelming chairmanship was being finalised behind closed doors, Root was opening others. His leadership encouraged his players to follow him while he was simultaneously earning the respect of the Australian hierarchy he was vociferously taking on. Root, 30, had been left bemused by the lack of detail in the initial presentation of Covid-19 protocols by Cricket Australia a week ago and his mood had only mildly improved by Tuesday’s follow-up with the Australian board’s chief executive Nick Hockley. Which is why the England captain reacted angrily to premature reports that he had agreed to front the 11-week Ashes tour to Australia. The situation was at a delicate stage in midweek, and remains so, as referenced by the ECB announcement on Friday that they had provided conditional approval for the five-Test series to take place ‘subject to several critical conditions being met’ before travel. In an echo of Nasser Hussain’s leadership during the Zimbabwe crisis of the 2003 World Cup, Root showed his team-mates he would stand up for them. That they were all in it together and the hint he might have gone early with the green light threatened to undermine that. Certainly not a natural orator when he took over the role in his mid-20s, Root is nevertheless said to have spoken impressively in the video link calls. One seasoned observer reckoned they had never heard him as authoritative. Only once satisfied that some freedoms for players’ families in Australia would be in the pipeline did Root commit — but with a caveat. Friday’s brief statement — which was no more than an agreement in principle — reflected that, allowing the England selectors to pick a squad in good faith yesterday while also leaving the ECB with wriggle room should their Australian counterparts not deliver the softeredged environment that Root has lobbied for on behalf of his team. Question marks surround several features of the proposed trip including entry into the country, given that exemptions are required for foreigners, and the differing quarantine conditions for those arriving from the Twenty20 World Cup as opposed to at the start of the tour — who head to the Gold Coast in early November. It is understood that some of the promises made to the England players are dependent on Australia making the progress in its gradual departure from national coronavirus lockdowns envisaged by its federal government — and effectively opening back up again next month. For that to happen, Prime Minister Scott Morrison has set a target of 80 per cent of the country’s population being double vaccinated. England’s players are then expected to be able to lead a relatively normal off-field life, move around freely and enjoy leisure pursuits like golf amongst themselves, even if eating and drinking indoors will be off limits. In the present, Chris Silverwood and his fellow selectors were mulling over whether to pick 17 or 18 players for the full squad yesterday evening, mindful of the need to have extra bases covered in the eventuality of a positive Covid test but not so many as to clutter the dressing room. The last thing a touring team want is to be over-populated with individuals who aren’t going to enter the mix for selection unless there are extreme circumstances. And extra bodies will be close at hand once the tour gets under way with a Lions group — to be named next week — also providing warmup opposition ahead of the series. Jos Buttler, the most vocal of the waverers, has committed to the tour and will travel on from Oman — where he is with England’s whiteball team — as vice-captain with Ben Stokes recovering from fresh finger surgery. The other player to have acted as dep uty to Root in Tests this year, Moeen Ali, recently retired from the game’s longest format. England’s extreme fast-bowling department has taken a hit with Jofra Archer and Olly Stone sidelined until 2022 with stress fractures to elbow and back respectively but Stuart Broad, a survivor of the 2010-11 Ashes win, is already bowling at 60 per cent capacity following a calf injury. However, despite the prospect of fielding a seam attack lacking an X-factor, it is arguably spin that provides a bigger dilemma. Lancashire leg-spinner Matt Parkinson has match-winning qualities but England are preparing to play safe by leaving him to the Lions and opting for the combination of Jack Leach and Dom Bess — who have been handed a full central contract and an increment one respectively. Probable England Ashes squad: Joe Root (captain), Rory Burns, Haseeb Hameed, Dawid Malan, Ollie Pope, Zak Crawley, Jonny Bairstow, Jos Buttler, Ben Foakes, Chris Woakes, Dom Bess, Stuart Broad, Jack Leach, Ollie Robinson, Mark Wood, Saqib Mahmood, Craig Overton, James Anderson. 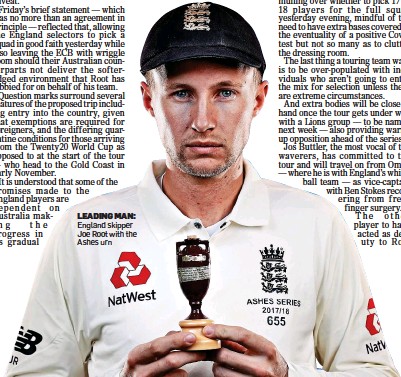