STILL NOT FIT FOR PURPOSE

By Jake Ryan and Glen Owen

PRITI PATEL’S feud with her own officials has deepened after the Home Secretary privately described her department as ‘not fit for purpose’, and civil servants labelled her management style as ‘moronic’. The Mail on Sunday can reveal that Ms Patel considered writing a letter to Cabinet Secretary Simon Case, in which she planned to lambast the officials’ failure to get a grip of the migrant boat crisis. The letter was not sent but officials got wind of it and hit back, telling this newspaper her behaviour is ‘erratic’ and ‘self-serving’. One stated bluntly: ‘She hates us and we all hate her.’ Another official said: ‘What’s become abundantly clear is that she is out for herself and only interested in how this plays out publicly. ‘If we actually worked collaboratively, then we could get things done, but instead we just have cloud cuckoo land public statements from the Home Secretary and we all look and think, “Well, that won’t work”.’ The phrase ‘not fit for purpose’ was used by John Reid, the former Labour Home Secretary, in 2006 to describe the scandal-struck immigration directorate. News of the civil war within the Home Office came as around 600 migrants completed the journey across the Channel yesterday. More than 25,000 have crossed in small boats this year – triple the number of 2020. An ‘exasperated’ Boris Johnson has ordered a cross-Government review of the crisis to be led by Cabinet Minister Stephen Barclay. Conservative MPs, particularly those in the Northern ‘Red Wall’ seats, have warned No10 that the migrant crisis is becoming the biggest electoral issue. Ms Patel has unveiled a stream of initiatives to stem the flow of migrants, but with limited success. One proposal for the Border Force to ‘push back’ dinghies to France before they crossed the Channel is understood to have been used just once since it was given the green light in the summer. ‘The “push back” policy had to go to several barristers to find one who would say “yes” to it legally,’ one official said. ‘It’s totally unworkable. She [Ms Patel] comes into meetings and her suggestions are erratic and outlandish. Any sensible, mature politician or policy maker would know they are never going to work, but she just comes out with it anyway. ‘Officials come out of the meetings and the texts start flying, describing her as a “moron” and an ‘idiot”.’ Home Office insiders say pressure on the Border Force to cope with the wave of migrants on the south coast is creating delays elsewhere. A source said: ‘This leads to shortages at entry points such as airports, leading to longer queues for all passengers. The whole system is at breaking point.’ The MoS revealed last week how outgoing Border Force boss Paul Lincoln had quoted lyrics from a track by The Pogues during a leaving speech to describe borders as ‘such a pain in the bloody a***’. Meanwhile, Kevin Saunders, the former chief immigration officer for the UK Border Force, yesterday told Times Radio that migrants ‘know they’ve won the jackpot’ when they get to the UK. In a bid to quell the storm, Ms Patel and Home Office Permanent Secretary Matthew Rycroft last night issued a joint statement, saying: ‘While personal and anonymous attacks are regrettable and a very unfortunate part of public life… we will not let them distract from building a department able to rise to the challenges of today and tomorrow.’ 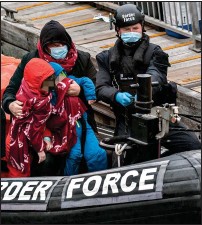