I need to get home to see my child

CALLOUS Insulate Britain protesters who blocked a bridge in London yesterday refused to move even when an NHS worker pleaded with them to allow him to get home to see his child. Speaking to a female protester, the desperate health worker begged: ‘Don’t block the road! I need to get home to my child.’ The incident, captured in a video clip obtained by LBC radio, took place on Vauxhall Bridge. The NHS worker said: ‘I need to get home, please... Don’t do this. This is really wrong. You have to think about people as well!’ A police officer sympathised with the man, saying: ‘I see you work for the NHS as well, but they don’t consider that, sir, unfortunately. They blocked the road and they don’t care.’ Earlier, several hundred members of the environmental group had marched through Westminster before blocking both Vauxhall Bridge and the nearby Lambeth Bridge with sit-down protests for up to five hours. Many carried placards claiming they had been ‘Betrayed by my government’ and that the recent COP26 summit in Glasgow – at which countries signed a global agreement aimed at reducing greenhouse gases and weaning the world off fossil fuels – ‘has failed’. Police forcibly removed several protesters from Vauxhall Bridge, but Lambeth Bridge was closed from 2pm to 7pm, causing major disruption across the capital. Yesterday’s protests were triggered by last week’s jailing of nine members of Insulate Britain for breaching injunctions designed to prevent them blocking roads. Emma Smart, 44, was handed a four-month sentence together with Ben Buse, 36, Roman PaluchMachnik, 28, Oliver Rock, 41, Tim Speers, 36, and James Thomas, 47, for taking part in a protest on the M25 on October 8. Ana Heyatawin, 58, and Louis McKechnie, 20, were sent to prison for three months, while Ben Taylor, 27, was jailed for six months after boasting that he would immediately block roads again if he was not imprisoned. Alanna Byrne, who took part in yesterday’s protest, said: ‘When I saw the “Highway Nine” give their testimonies in court this week, I knew I had a duty to take a stand today in their place.’ She claimed ‘the failure’ of COP26 ‘should shock everyone into action’, although world leaders have hailed the talks a success. As well as agreeing to cut carbon dioxide output, countries also pledged to reduce methane emissions and coal use, stop deforestation by 2030 and increase funding into clean energy technologies. 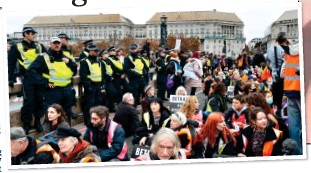