Eliza’s driving’s gone to the dogs . . . but it’s fine this time

HAS Lady Eliza Manners learned nothing after her brush with a speed camera? After driving too fast, Eliza, 24, managed to persuade a court to halve her fine to just £50, pleading ‘financial hardship’. So it wasn’t the brightest idea for the daughter of the Duke and Duchess of Rutland to get behind the wheel with pug Lord Winston perched on her lap. She could have been hit with a £5,000 penalty for failing to secure Winston in the car, but was in the clear this time as she wasn’t on a public highway when this snap was taken – just tootling around paths at family seat, Belvoir Castle. Meanwhile, is Otis Ferry – who is dating Eliza’s sister Alice – driving at a career in pubs? Here’s Otis, left, son of pop legend Bryan, at The Bridges in Shropshire, recently taken over by his friends James and Diana Moores. He’s been pulling pints and tells me: ‘I’m not full time – I helped them get set up. None of us had any past experience so it’s been a sharp learning curve!’ 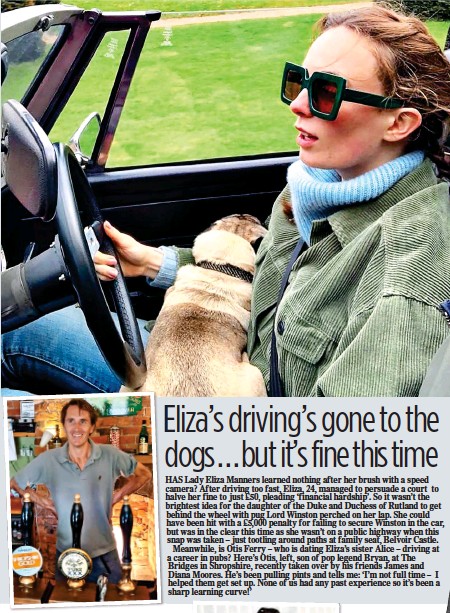