Racism-row cricketer sent ‘creepy’ texts on WhatsApp to girl, 16, he met on flight

By Glen Owen and Georgia Edkins

RACE-ROW cricketer Azeem Rafiq has been accused of sending ‘vulgar’ messages to a teenage girl six years ago. The girl was 16 when she met Mr Rafiq on a flight from Manchester to Dubai – but told him she was 17 to ‘seem a bit older’. She said he messaged her saying: ‘u know what I wanted to do on the plane?’ and ‘I want to grab you push u up against wall and kiss you’. The girl, who is now 22, described his message as ‘creepy’. She also claimed Mr Rafiq invited her to have a vodka and coke with him on the plane. One of Mr Rafiq’s complaints during his bombshell evidence to MPs last week in which he said cricket was institutionally racist, was that he had been forced to drink alcohol by his team-mates. Talking to the Yorkshire Post newspaper, the girl said: ‘I’m not disputing any of his racism claims, because I’m sure they’re very true experiences. ‘But certain aspects of what he said just don’t really sit right with me. ‘If he was being forced to drink by his team-mates, then surely that wouldn’t then mean he would be drinking alone on a flight and encouraging a 17-year-old girl to be drinking with him.’ A spokesman for Mr Rafiq, 30, said: ‘We need to look into this, so cannot comment further for now.’ The row over Mr Rafiq’s racism allegations against players and officials at Yorkshire County Cricket Club took another twist last night with claims that he had been the victim of a dirty tricks campaign. A Commons source has said that on the eve of Mr Rafiq’s appearance before the Digital, Culture, Media and Sport Committee last week, a senior sporting figure made allegations to members of the committee about aspects of Mr Rafiq’s lifestyle. The source said: ‘They made various allegations about his private life and told us that as a result we shouldn’t trust his evidence. ‘We just saw it as dirty tricks, an attempt to discredit evidence which they would find uncomfortable’. Mr Rafiq said that he wanted to be a ‘voice for the voiceless’, and he was ‘not going to let this go, no matter how much damage it causes me’. But he was then himself plunged into controversy when he was forced to apologise for antisemitic Facebook messages he sent in 2011. Tory MP Michael Fabricant has raised fears of a witch-hunt in the wake of the racism row. Mr Fabricant told the BBC: ‘I just don’t want us to go down a witch-hunt direction. ‘I’ve got a horrible feeling if we’re not careful maybe, not so much through social media, but some of the journalists will be digging around, will start picking on other sportsmen about what they might have done ten or 20 years ago. ‘I’m of Jewish extraction. When I was at school, there were sometimes odd comments made but… I don’t think they were antisemitic comments. I think it’s just because sometimes people pick out differences. ‘But it’s all a question of getting the balance right and making sure that we don’t end up, as I say, by victimising those people who are not remotely racist but, you know, have behaved in a way that wasn’t really appropriate.’ Last night a former Scotland cricket star added his voice to the furore. Majid Haq, 38, Scotland’s all-time wicket-taker, claims he was discriminated against by senior players while playing as part of Scotland’s national team. The spinner once claimed he had not been selected for a crucial match due to his race, writing on social media: ‘Always tougher when you’re in the minority!! #colour #race.’ 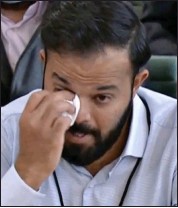