By Charlotte Griffiths EDITOR AT LARGE

HE’S the former Chancellor best known for having nine jobs. But George Osborne may have taken on his most challenging role yet – designing and building a swanky new kitchen for his £1.6million Somerset mansion. The 50-year-old and his fiancee Thea Rogers have hired architects to design a ‘Coach House’ kitchen-diner, which will involve knocking down their garage and two annexed store rooms. Planning documents seen by The Mail on Sunday show that local firm Benjamin and Beauchamp has researched the building’s 223-year history and plans to restore it to its authentic Georgian splendour. A grand entrance will be created with a ‘formal direct route’ from a newly created car park to the front door, which it is hoped will ‘reinstate a sense of significance in its setting and arrival’. Documents also note that externally ‘ill-considered phases of pointing’ have ‘detracted from the appearance of the original masonry’ and that internal features must be reinstated to ‘reflect the age and character of the house’. The house, which is described as having been ‘built as a standalone villa within open countryside’, is on the edge of the town of Bruton and is surrounded by several smaller houses and a nearby Texaco petrol garage. Currently, Mr Osborne and Ms Rogers, the 39-year-old mother of his four-month-old son, feel their existing kitchen, with a two-door Aga and four-ring electric hob, is insufficiently grand. Mr Osborne, whose parents founded the upmarket design firm Osborne & Little, which is famous for its luxurious wallpaper, has also enlisted flamboyant set designer Patrick Kinmonth to transform the three-storey Grade II-listed house into a paragon of ‘Somerset chic’. Kinmonth – an internationally acclaimed opera director, who is a long-term collaborator of the fashion photographer Mario Testino – usually designs elaborate sets for the opera, theatre and films, but occasionally turns his hand to interiors for friends. Kinmonth’s own Chelsea apartment has been described as a ‘jewel-box’ filled with ‘vintage gems from near and far’. Locals have joked the design of the project may have been inspired by Mr Osborne’s professional life – and two of his jobs. The plans reveal that the new pillars on the kitchen extension are similar in design to the Palladian grandeur of Mansion House in the City of London, where he used to deliver major speeches when he was Chancellor. It also closely resembles the Greek Revival-style facade of the British Museum, of which he was appointed chairman this year. As well as the glass-sided extension, Mr Osborne is also planning two new stylish en-suite bathrooms, and a new master bedroom suite that would bring the total number of bedrooms to six. The 1.2 hectares of land will also be re-landscaped, with a new terrace and garden area. Great care will be taken to protect a copper beech tree planted in 1897 to commemorate the Diamond Jubilee of Queen Victoria. Rooms are also being rearranged to give an improved view of the gardens, the orchard and a paddock, all of which are set on sloping ground on top of a hill overlooking Bruton and the surrounding countryside. Ms Rogers’s name was recently registered to the property, which was bought last year, although her name is not yet on the title deeds. She used to work with Mr Osborne during his time at the Treasury and they began dating after his 21-year marriage broke down. A mini-house was recently built in the garden, not for the family, but to provide accommodation to Malcolm Hord, the main house’s previous owner. 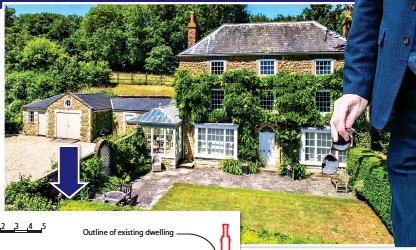