THE devoted policeman who promised dying colleague Yvonne Fletcher he would bring her killers to justice has told how he burst into tears when his pledge came nearer to being fulfilled this week. Retired officer John Murray, 66, has worked tirelessly to see her killers convicted. Now a judge has ruled that Saleh Ibrahim Mabrouk, an aide to Libyan tyrant Colonel Gaddafi, was ‘jointly liable’ as the shooting’s chief architect. PC Fletcher was 25 when she was shot by gunmen in the Libyan embassy in West London on April 17, 1984, while policing an antiGaddafi protest outside. Mr Murray, then 29, said: ‘She was trying to talk, but was just making gurgling sounds. I cradled her head to keep her comfortable.’ As she lay dying, the last words she heard were his: ‘I don’t know what the f*** has happened, but I promise you I’ll find out and I’ll get them’. Following his ceaseless campaigning, on Tuesday at the High Court, Judge Mr Justice Martin Spencer singled out Mabrouk. Mr Murray said: ‘Those are words that I’ve wanted to hear a judge say for a very, very long time. ‘The whole court erupted into applause and the judge, who was also emotional, said “I have never heard anything like that”.’ His triumph in the civil court gives fresh vigour to the Met Police investigation. Other suspects are at large, and last Monday, two detectives travelled to Tripoli to discuss the case with Libyan officials. But he said: ‘Don’t you think it’s wrong that I have got to do this for the authorities to take any action?’ The former Met officer who now works as a school caretaker, said: ‘I’m not finished yet. Finished means Mabrouk or anybody else facing a judge in a criminal trial.’ Mabrouk, who is thought to live in the Libyan town of Bani Walid, has evaded justice for more than 30 years. Without a prospect of a criminal trial, Mr Murray decided to fight in the civil courts, where the bar for success is based on a ‘balance of probabilities’ rather than guilt ‘beyond reasonable doubt’. Mabrouk, who had been arrested before shots were fired from the embassy in St James’s Square, emailed Mr Murray’s lawyers to deny guilt. But Mr Murray said ‘I made a promise to Yvonne. If it had been me murdered that day, Yvonne would be here doing this.’ He has used his own savings to fund the legal fight, including trips to Libya, Morocco and Tunisia. He has spent £130,000 and is £40,000 in debt. He is divorced and lives in a rented flat in Chingford, NorthEast London, with his daughter Laura, 33. His other daughter Sarah, 37, lives in Hertfordshire. ‘It’s been worth every penny,’ he said. ‘As far as my daughters are concerned, I should have been able to give them a lot more than I have. It sounds a sad story, but the sacrifices have been worth it.’ Yesterday he visited Miss Fletcher’s grave in Semley, Wiltshire. He said of his daughters: ‘It would be wrong of me to place the grief on to them. One day, when it’s all over, I’ll tell them the full story.’ 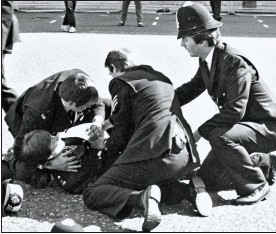