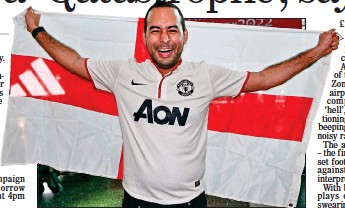 ENGLAND and Wales fans landed in Qatar yesterday amid a ‘desert storm’ of rows over accommodation, alcohol and overcrowding. Supporters were greeted by blazing temperatures of 34C (93F) in the capital city Doha, which is hosting the first World Cup in a Middle Eastern country. As football’s greatest show on earth gets under way this afternoon, Qatar’s rulers were already in damage-limitation mode as the first fans began to upload footage of ‘hellish’ conditions in the accommodation villages. There were complaints, too, that security guards were overly aggressive, with one fan telling The Mail on Sunday he was cornered and accused of ‘spying’ as he walked to his holiday apartment. Sam, 33, from Reading, was left shaken by the ‘hit and run’ incident which saw his mobile phone knocked out his hand by three security guards as he walked along while video-calling his family. The England fan, who did not want to share his surname due to fears of being targeted by the hardline Qatari authorities, said: ‘I don’t scare easily, but their behaviour was totally unnecessary. It did leave me shaken up.’ Many fans are also continuing to vent their anger after the Gulf nation’s sheikhs imposed a shock last-minute beer ban at stadiums. Yesterday the muchvaunted Fan Festival site opened – but supporters had to queue for two hours to enter, with no access to shelter or water in the searing heat. England begin their campaign for World Cup glory tomorrow against Iran, kicking off at 4pm (1pm UK time). Wales – in the tournament for the first time since 1958 – play the USA at 10pm (7pm UK time). Both home nations are in Group B, meaning they will play each other in a derby clash later in the month, with the Prince of Wales – a staunch England fan – among those left conflicted. It is by far the most expensive World Cup ever put on, with Qatar having ploughed a jaw-dropping £185billion into building stadiums and infrastructure in the 12 years since being controversially awarded the soccer showpiece. But it is the fans who will be feeling the pinch, with exorbitantly priced accommodation and beers costing a sobering £12 for less than a pint in the few venues permitted to sell alcohol. And footage and images on social media appeared to show piles of rubble and industrial machinery at the Rawdat Al Jahhaniya fan village, west of Doha, which will be home to thousands of England and Wales fans. Although billed, at £185 a night, as a cheaper alternative to expensive hotels, some fans have likened it to a ‘quarantine camp’ or detention centre. At the brightly coloured huts of the fan village Cabins Free Zone, near the international airport, the first British guests complained the cabins were ‘hell’, with stop-start air conditioning, smoke alarms that keep beeping and generators making a noisy racket. The already fraught World Cup – the first in a Muslim nation – has set football’s traditional trappings against the hosts’ conservative interpretation of Islam. With bans on vaping, public displays of affection, alcohol and swearing – all of which can lead to arrest – British police ‘peacekeepers’ have arrived in Qatar to ‘calm down’ boisterous supporters. About 3,000 to 5,000 England fans are expected for the group stages, with numbers set to increase if the Three Lions progress. Between 2,000 and 3,000 Wales fans are anticipated, while both sides could see numbers bolstered by expats in the region.