...AND BEAU’S BACK AS MARGARET 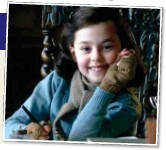 VIEWERS might do a double take when they see the teenage Princess Margaret in the upcoming series of The Crown – because the same actress played her at the beginning. Beau Gadsdon portrayed Margaret as a child in the first season, which was filmed in 2015 when she was just seven. The star, now 14, appeared with the young Princess Elizabeth, played by Verity Russell, in scenes focusing on their uncle Edward VIII’s abdication. Miss Gadson, who recently starred in The Railway Children Return, has also appreared in two other Netflix shows, The Duchess – produced by comedian Katherine Ryan – and another drama called Treason.