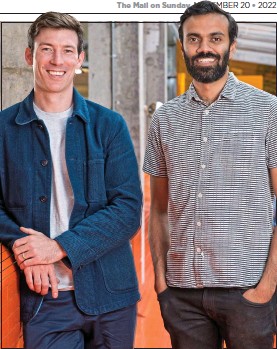 TWO millionaires whose collapsed energy firm has cost taxpayers £6.5billion have got off ‘scot-free’, furious MPs said last night. The founders of Bulb are being urged to repay millions after figures buried in last week’s Autumn Statement revealed the staggering cost of the company’s demise. The price being paid for the debacle is the equivalent of every household in Britain coughing up about £230 to prop up the business. Bulb was founded by Hayden Wood and Amit Gudka in 2014 and was once the fastest-growing company in Europe. It imploded a year ago and was put under Government control until a takeover was agreed with bigger rival Octopus Energy last month. The money used to support Bulb is equivalent to 12 per cent of the £55billion in tax rises and cuts to public spending announced by Chancellor Jeremy Hunt. Wood and Gudka pocketed £4million each after selling shares in a 2018 fundraising and, this spring, it was revealed Wood was still earning a £250,000 salary five months after the firm was seized by administrators. Dame Angela Eagle, a member of the Treasury Committee, said if ‘they had any shame’ they would return the cash. She criticised entrepreneurs who ‘dip in and then bugger off, leaving their liabilities to the public’. Bulb’s collapse doesn’t seem to have stalled Wood or Gudka’s carers. Gudka, a former DJ, exited Bulb before its collapse to launch a battery storage company. Wood landed a role at venture capital firm Giant Ventures two months ago. It described him as a ‘highly valued venture partner’. Ed Miliband, Labour’s Shadow Climate Change Secretary, has slammed the ‘staggering’ cost of Bulb’s failure and criticised Government handling of the saga. He said a decision to prevent Bulb hedging the purchase of energy for customers while in administration – a practice that helps protect energy suppliers from price increases – was ‘inexplicable’. Ironically, Mr Miliband’s brother David sits on the Giant Ventures advisory board. Lord Browne, the former chief executive of BP, also sits on the board. Giant Ventures is also an investor in Gudka’s company Field Energy. When Bulb collapsed as energy prices soared, it had 1.7million customers. Its Government bailout is the biggest since the rescue of Royal Bank of Scotland and HBOS in the financial crisis. Bulb’s administrators have passed a report on the directors’ conduct to the Department for Business, Energy and Industrial Strategy. Labour MP Darren Jones, chairman of the Business, Energy and Industrial Committee, said: ‘Again, it looks like billpayers are picking up the tab while many of those who created a problem go scot-free.’ Dame Angela added: ‘Some of them founded these companies on a wing and a prayer and paid themselves colossal amounts.’ Andy Prendergast, of the GMB union, said: ‘Seeing fat-cat bosses of a bust business walk away with fortunes, while the taxpayer foots the bill for their mistakes, is stomach-churning.’ Giant Ventures, Hayden Wood and Field Energy were contacted for comment.