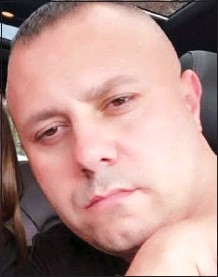 A TEENAGE Albanian illegal migrant who forced his way into a woman’s home, used her phone to contact a convicted criminal, a Mail on Sunday investigation reveals. The boy had entered the house shortly after arriving on Dover Beach among about 40 asylum seekers on a flimsy dinghy which had crossed the Channel. In broken English, he demanded that Sue Doyle, 59, take him to London or Manchester, and grabbed her two mobile phones. Now The Mail on Sunday has established the teenager contacted Rezart Balesi, 40, an Albanian living near Bury, Greater Manchester, who has been convicted of violent affray in the UK and is under investigation in his native country for money laundering almost £50,000. The boy’s last message to Balesi, written in Albanian, was: ‘I think they got me. Get a solicitor. Police have entered the house.’ The revelations come amid concern in Dover over the police failing to protect residents from illegal migrants. Ms Doyle had run out of her house screaming after the boy broke in on October 23. Her neighbour Louise Monger, 37, called the police and tried to drag the teenager out. He resisted, shouting: ‘No police, no police.’ Ms Monger spoke on the phone to Balesi, who acted as translator. Balesi told her a blue VW Golf was on its way. She saw a blue VW Golf drive past but not stop, possibly because of a police van behind. The Albanian boy was taken away by police, who took photos of the Facebook Messenger messages and calls the boy made. It is believed they did not investigate further. The boy was eventually arrested by Border Force. Ms Doyle was left so traumatised that she has moved out of the house where she had lived for 30 years. In 2017, Balesi and his younger brother Refail, both pleaded guilty to violent affray at Bolton Crown Court and were given suspended sentences of 18 months. The two men were running a pub, the Lord Raglan, where, in 2015, a fight broke out in which two men sustained injuries ‘consistent with stab wounds’, and one was hit over the head with a bottle. CCTV footage of the fight showed Balesi with a bottle in his hand. On September 29 this year, police in Albania arrested Balesi on suspicion of money laundering. Officers confiscated about £47,000. The MoS tracked Balesi down to Ramsbottom, a village near Bury, where he and his British wife, Claire, 39, run the Village Bistro. He refused to speak to the MoS. Last night, questions were asked as to why Kent Police did not investigate the 16-year-old entering Ms Doyle’s house illegally. After pressure from local MP Natalie Elphicke, two officers interviewed Ms Doyle but told her not to press charges because the teenager would be likely to flee on bail, according to Ms Monger. Kent Police said: ‘Officers acted on information provided to them at the time and in conjunction with the wishes of the homeowner, who was content with those actions.’ Last night a lawyer acting for Balesi said that the allegations against his client were ‘unsubstantiated and unproven’. An illegal migrant has died in hospital a week after arriving on a boat across the Channel. The Middle Eastern man, believed to be in his 30s, was taken to hospital soon after the boat arrived in Dover.