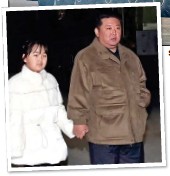 IN A bring-your-child-to-work day unlike any other, North Korean despot Kim Jong Un has revealed his daughter to the world… at a ballistic missile launch. Wearing a white coat, she was pictured holding hands with her father by the state news agency KCNA, which did not name her. But experts believe she is called Ju Ae and is thought to be about 12. Kim is believed to have two girls and a boy. KCNA said he, his wife, Ri Sol Ju, and their ‘beloved daughter’ watched the test-firing of an 85ft Hwasong-17 intercontinental ballistic missile together. ‘This is the first occasion where we have seen Kim Jong Un’s daughter at a public event,’ said Michael Madden, a North Korea expert at the Stimson Center think-tank in Washington DC. ‘It is highly significant and represents a certain degree of comfort on Kim Jong Un’s part that he would bring her out in public in such a fashion.’ Kim’s private life is kept secret. South Korean media claim he wed former singer Ms Ri in 2009, and they have three children, born in 2010, 2013 and 2017.