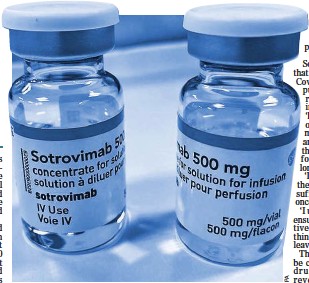 FOUR Covid drugs which have kept thousands of vulnerable Britons out of hospital were quietly removed last week, after the NHS spending watchdog pulled funding for them. While the Covid vaccines and boosters provide strong protection against serious illness for most of the population, about 500,000 people suffer with conditions that mean their bodies do not respond to the jabs, leaving them at serious risk from the virus. Since last year, these patients – who primarily have blood cancers such as leukaemia, kidney disease or have had an organ transplant – have been able to access five antiCovid drugs which prevent them from falling seriously ill and ending up in hospital. But on Wednesday, the National Institute for Health and Care Excellence (NICE) said it will withdraw four of them from NHS use as they are no longer deemed cost-effective. Worryingly, it will leave thousands of kidney disease sufferers with no available treatment to prevent them from being hospitalised with Covid. The only remaining medication, Paxlovid, cannot be used by these patients due to its severe side effects. ‘It’s disappointing, surprising and unfair,’ says Fiona Loud, policy director for the charity Kidney Care UK. ‘These treatments have been an important safety net for people with kidney disease, who remain among the most vulnerable to Covid and who have the least protection from the vaccines.’ The news has also renewed calls for the Government to fund the medication Evusheld, a biannual injection created by AstraZeneca, the British firm behind one of the first Covid vaccines, which is proven to stop vulnerable patients from catching the virus in the first place. However, as reported by this newspaper, though Evusheld was approved by UK health regulators in March, Ministers claim it is still unclear whether the drug is effective against the latest Omicron variant. The drug is already in use in 32 other countries, including the US, France and Israel. Currently, Evusheld is only available privately in the UK, costing upwards of £1,000 a dose. ‘The delay in providing Evusheld, coupled with this proposal to remove many treatment drugs, leaves vulnerable kidney patients with no prospect of protection or treatment, unless they are willing to pay thousands of pounds out of their own pocket,’ says Mark Oakley of the campaign group Evusheld For The UK. ‘This is totally inequitable and contrary to the Government’s promise to protect the most vulnerable.’ As many as 500,000 Britons are thought not to have responded to the Covid vaccines. They either have conditions that leave the immune system weakened, or take treatments that suppress the immune system, drastically limiting the protection provided by the jabs. Evusheld is a combination of two medicines – tixagevimab and cilgavimab – which works by attaching itself to the Covid virus and inhibiting its ability to bind with healthy cells and infect the body. Given as an injection every six months, studies show it can reduce the risk of infection by 50 per cent and the likelihood of death from Covid by more than 80 per cent. The Department of Health and Social Care has repeatedly said that the availability of other antiCovid drugs negates the need to purchase Evusheld. NICE has recommended continued funding of Paxlovid but said it was ‘highly uncertain’ that the four other available drugs – sotrovimab, molnupiravir, remdesivir and ronapreve – work against the latest Covid variants. Therefore, from January, they will no longer be offered. ‘If the only drug left is Paxlovid, then kidney patients will really suffer,’ says Dr Lennard Lee, an oncologist at Oxford University. ‘I understand that NICE wants to ensure treatments are cost-effective to the NHS, but it needs to think about what protection this leaves the vulnerable this winter.’ The Government has reason to be cautious about funding Covid drugs. Last month, research revealed that the widely prescribed medicine molnupiravir had not reduced Covid hospitalisations in the UK, despite the fact an estimated £1 billion has been spent on more than 2.2million doses. Paxlovid has already cost the taxpayer more than £1.2 billion for 2.7 million doses. NICE says a final decision will be made in January. ONE patient who fully understands the danger Covid still poses is Jo Barrett, 51, from Manchester, who was hospitalised with the virus in October 2021. Jo, a special needs teacher, has had two kidney transplants due to a genetic disease. She caught Covid from a pupil despite having had three vaccine jabs. She was admitted to hospital for treatment but continued to deteriorate. Eventually she had to be placed in a medically induced coma and put on a ventilator for five weeks. ‘It was a terrifying experience and I’m still recovering a year later,’ says Jo. Jo wants to return to work but her school has placed her on indefinite leave until they can guarantee she will not fall severely ill with Covid again. ‘They think it’s too risky to have me in the school,’ Jo says. ‘So without Evusheld and anti-viral drugs I can’t go back. I’m going to lose my job because the Government won’t fund these drugs – it’s appalling.’