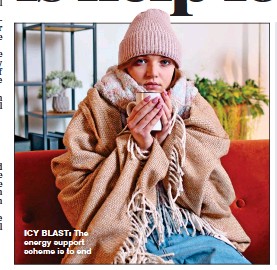 CHANCELLOR of the Exchequer Jeremy Hunt has made it clear that the Government will not continue to subsidise household energy bills indefinitely. He pointed out in his Budget statement on Thursday that the cost of providing such support is equivalent to that of funding the NHS. As Putin’s war in Ukraine rages on and wholesale energy prices remain sky-high, it is clear that households could be facing exorbitant bills for gas and electricity for years to come. So what help is available now and what financial assistance can households expect in the future? Last week’s Budget gave a few clear indications about what is in store. Energy bills are set to rise from April when the support available from the Government will be shrunk back considerably. The current energy price cap means that households are paying an average of £2,500 a year for gas and electricity. Were the cap not in place, we would be paying close to £1,000 more. But from April, the cap will rise to £3,000 for the next 12 months. In addition, this year’s energy support scheme – which amounts to a payment of £400 for each household’s bills – will not be extended next year. Households on means-tested benefits will get an additional payment of £900 next year to help deal with the high cost of living. Those who use the most could pay more THE energy price cap could also be amended again sometime after April so that those who use very large volumes of energy receive more limited subsidies. For example, households with heated swimming pools may have to pay even more for their energy. The Government will explore ways to ensure that homes which use a lot of energy for medical reasons are not put at risk. Help for off-grid households HOUSEHOLDS not connected to mains gas will get £200 towards their bills this winter – double the amount previously promised. Those who heat their homes with oil, LPG and biomass boilers will receive the payment via their electricity supplier. The Government is considering the introduction of social tariffs from April 2024. These would likely amount to cheaper energy deals for households on the lowest incomes. Support to cut energy bills THE Government has stepped in to help with the soaring cost of energy. But Hunt warned that over the long term that is unsustainable. He said: ‘There is only one way to stop ourselves being at the mercy of international gas prices – energy independence combined with energy efficiency.’ Hunt announced an acceleration in the programme to switch to renewable energy – including proceeding with the new nuclear power plant at Sizewell C in Suffolk. He also announced a further £6.6billion in funding from 2025 to 2028 to improve the energy efficiency of homes and other buildings. Hunt said the reduction in demand resulting from greater energy efficiency would shave the equivalent of £450 off the average annual household energy bill. Details of how households will be able to access the funding have yet to be announced. Further details have been promised by the newly-formed Energy Efficiency Taskforce. Industry insiders expect the funding to be used to extend an existing scheme called the Energy Company Obligation (ECO), which some households can already access for help with energy efficiency measures. Mike Foster, chief executive of the Energy and Utilities Alliance, says: ‘The ECO scheme is likely to be expanded so that it is not just those on low incomes and living in the most poorly insulated homes that will be able to benefit.’ He adds that some households may want to delay making improvements to their energy efficiency in the hope that they can benefit from Government funding that may be announced in the future. ‘However, those who do hold out will miss out on the savings they could make on their energy bills in the meantime,’ he points out. You can check your eligibility for existing support with improving your home’s energy efficiency at gov.uk/improve-energy-efficiency. Industry body Energy UK has welcomed the new funding announcement, but called for it to be accessible sooner so households can start to benefit from it now as they are already struggling with extreme bills. Energy UK’s policy manager Louise Shooter says: ‘We understand there are restraints to materials and labour, but we would urge the Government to bring some of the funding into this parliament.’