DID THEY BLOW A FAMOUS VICTORY? 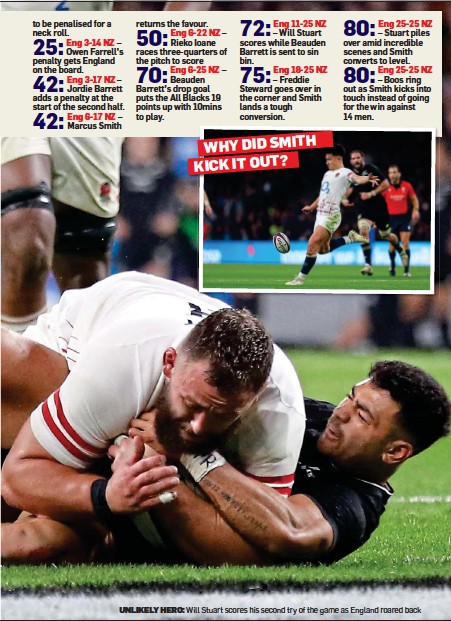 THE Twickenham crowd did not know whether to dance or cry. They were emotionally spent. There were 70 minutes of frustration, 10 minutes of elation and one final second of despair. After one of the worst performances of Eddie Jones’s tenure, they pulled off one of the greatest comebacks in Twickenham history. Three tries in a matter of minutes changed the mood from a funeral to a festival, with Will Stuart emerging as the unlikely hero. The prop’s quickfire tries had the All Blacks on the ropes. New Zealand were down to 14 men in the final play and England had a chance to make history, but Marcus Smith kicked out the ball and settled for a draw. Henry Slade looked on with his head in his hands. Manu Tuilagi danced on the sidelines to the Freed from Desire disco music. Nobody quite knew what to make of it. The first 70 minutes were nothing short of a car crash for England. At times, they looked like a team that had been run of by New Zealand’s team bus on their way in. A shambolic catalogue of errors and ill-discipline, with an attacking structure that looked more like road kill, left the crowd making jokes about Warren Gatland stepping from the Amazon TV box to the England coaching box. The first penalty came after 40 seconds. ‘I’ll get him!’ shouted Ellis Genge, before flying out of the line in an offside position to land a shot on Sam Whitelock. It gifted the All Blacks an early entry into England’s 22 but, on that occasion, they got away with it. It was a disastrous opening for Jack van Poortvliet. They had branded this as ‘big boy rugby’ and it was a baptism of fire for the young scrum-half. After kicking away the ball to kill England’s first visit to the New Zealand territory, he threw a slow pass from the tail of the lineout to Owen Farrell. Flanker Dalton Papali’i saw it coming a mile off, pushing into the channel for the interception, before running half the pitch to score. Next, there was a knock-on at the base of a ruck. Lining up against Tyrel Lomax, blessed with a 10kg weight advantage, Genge was penalised for hinging at the scrum. Brodie Retallick claimed the lineout and the visiting pack piled in to push over Codie Taylor for a second try inside nine minutes. England’s stock was crashing faster than cryptocurrency. All Blacks scrum-half Aaron Smith was loving life, goading the hosts for giving them ‘easy outs’ whenever the hosts got the ball. Billy Vunipola was penalised for being offside at a promising attacking maul and England were lucky not to be further behind. Van Poortvliet was turned over at the back of a caterpillar maul by Ardie Savea but Rieko Ioane’s score was ruled out for a neck roll on Farrell. England were a distant second best. They rarely provided clean ball at the ruck, with Jonny Hill knocking on the ball metres from the Kiwi line. All they had to show from the first half was three points from the boot of Farrell. Richie Mo’unga peppered the English wings with crossfield kicks, avoiding the aerial presence of Freddie Steward. Farrell missed a kick to touch, the Kiwi pack turned over a maul and Genge was penalised at the scrum. So often, England were the masters of their own downfall. Jordie Barrett knocked on as his team came close to a third try before half-time, but settled for a three-pointer after Genge was penalised for being offside. ‘Is there anything we can do better?’ Farrell asked Mathieu Raynal as they walked in for the halftime break. The French referee resisted the opportunity to make a cheap gag. Farrell received treatment on his ankle just before half-time and handed over the kicking duties to Smith, who kicked the first points of the second half. There was a flash of tempo and physicality when Manu Tuilagi surged into the All Blacks red zone, but the play ended with a penalty against Maro Itoje for latching. The English frustration was there for all to see, Smith was getting dragged into off-the-ball handbags and Farrell losing his cool with the officials. And after 50 minutes, England were undone by a masterpiece. Sam Simmonds had the ball dislodged from his grasp and the tourists attacked from deep inside their own half. Beauden Barrett sent a kick pass to Caleb Clarke, who switched the ball to Ioane to charge clear to score from one end of Twickenham to the other. Jones unloaded his bench. With time ticking away, England played to their instincts. After a Beauden Barrett drop goal, Smith lifted his head up and ran, breaking into the 22. Beauden Barrett held onto him in the tackle, earning a yellow card, and Stuart just about managed to ground the ball for what appeared to be a consolation try. With a one-man advantage, England cut loose. They broke out of their tactical straitjacket, running the ball from their own half, with lock David Ribbans pulling off a spectacular offload before Steward scored down the right wing. And they kept coming, defying the odds, as Stuart muscled his way over for to level the scores. His face on the big screen suggested a knock on, but the try was awarded and Smith kicked the conversion to draw level. Twickenham was on its feet, baying for blood, filled with belief, momentum flowing through English legs. They wanted the win but, with their emotions thrown around like a Twickenham tumble dryer, Smith booted the ball into the stands for a bitter-sweet draw.