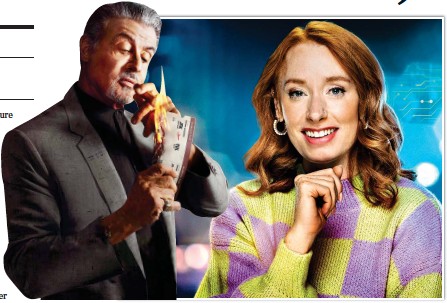 The Secret Genius Of Modern Life BBC2, Thursday ))))) Tulsa King is a first venture into television for Sylvester Stallone, written for him by Taylor Sheridan (Yellowstone), in which Stallone plays a timid bookseller who can’t throw a punch, is campaigning to close down the neighbourhood lap-dancing club and embroiders prettily in the evenings. Or maybe not. In fact, very definitely not. Instead, this is a conventional gangster drama assembled around the usual heroic Stallone persona but, to the extent that it works, it does so because of Stallone and his on-screen presence. It would wholly be a bore otherwise. Stallone plays Dwight ‘The General’ Manfredi, a New York mafia capo who took the rap for a murder and is now being released after 25 years in prison. He expects to take up his former place in the organisation, or as he growls in the voice-over: ‘I married this life and after keeping my mouth shut for all these years, I’m going to see if it married me back.’ It didn’t. There’s a new don, and this don has no interest in welcoming Manfredi or affording him his former role, which doesn’t go down well. Biff! That’s Manfredi, who still has it in his 70s (Stallone’s now 76), knocking out one of the beefy young chaps around the table. (I thought we’d agreed not to write men like this any more, but Manfredi biffs a lot.) He’s told that if he wants to stay in the mob he must go to Tulsa, Oklahoma, to set up a crime business there, although it’s really their way of putting him out to pasture. Manfredi isn’t happy but has no choice. So it’s off to Tulsa, where he continues to be befuddled by modern life: apps, Uber, iPhones. This is billed as a ‘dramady’, and I thought they could have made more of the funny side of that, and perhaps they do (I have only seen the first episode). Actually, I was most hoping that the comedy aspect would have him, for instance, set up a greengrocery business against the competition: Vito Parisi’s Veg, say, and Carmine Stracchi’s Carrots, thereby sparking a price war that hasn’t been as brutal since Jimmy ‘The Broccoli’ Gannespeche was put out of business by Vinnie ‘The Beetroot’ Carpelli. But that wasn’t to be, either. Biffing folk along the way – he further biffs a car salesman and knocks a security guard out with a water bottle – he hires a driver (Jay Will) and homes in on a medical marijuana establishment, where he forces the owner to start paying him protection money. He then holes up in a swanky hotel, and I don’t know what ultimately convinced Stallone to take on this project but there’s a scene where a much younger woman comes on to him in a lapdancing club (natch) and it’s back to his room and then, after the deed is done, she is flabbergasted by his age. ‘I would have said you’re a hard 55,’ she says. I reckon that scene might have talked him into it. This does have a light-hearted, caper-ish tone but it falls between two stools: not humorous enough to be that much of a com edy, and not committed enough to the narrative to be much of a drama. This is mostly for Stallone fans who will seek out Stallone whatever. But to end on a positive note: his charisma does make it just about tolerable for everyone else. The Secret Genius Of Modern Life is itself genius. Each week Dr Hannah Fry takes a deep dive into one aspect of modern technology. Last week it was bank cards, which was terrific, and this week it was food-delivery apps, used by millions of us every day, Dr Fry, a mathematician, is a joy and a delight and a fantastic communicator. She makes you feel you understand even if, chances are, you don’t really. I didn’t realise I didn’t until I thought I’d explain something here, then found I couldn’t. But when she was explaining it, with sticks, I thought I did. And that’s what matters. She delved into Deliveroo’s algorithms, while also serving up fascinating titbits. Our favourite takeaway is the burger, but in Italy? It’s sushi! And the first-ever takeaway? This was Kin-Chu Cafe (Los Angeles) which, in 1922, would deliver ‘real Chinese dishes’ once you’d put your order in via the landline. Or it was the detour to explain the GPS system, which enables those poor Deliveroo riders who wobble all over the road to arrive exactly at your door. I’d never really thought about how GPS works, but if I had, I probably wouldn’t have imagined that the satellites are operated by only a handful of people from a squat building in Colorado. And then there’s Gladys West, an AfricanAmerican who was born into a share-cropping family, got herself to college and became the mathematician who modelled the actual shape of the Earth – it’s not perfectly round – in the 1970s. GPS couldn’t have happened without Gladys who, when she first started work (at a US naval base), had to enter and exit via a separate door due to racial segregation. Next time you order pizza, you’ll probably thank the delivery person, but you might wish to add: ‘Thanks, Gladys.’ Seems only right.