Sex parties, lies and the joys of a nice cup of cocoa 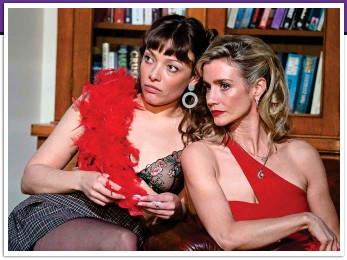 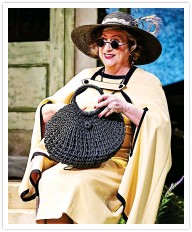 The Sex Party Menier Chocolate Factory, London Until January 7, 2hrs 20mins ))))) Mrs Warren’s Profession Theatre Royal, Bath Touring until April 8, 2hrs 20mins ))))) The Sex Party is set in a swanky North London kitchen while, in the living room, unseen consenting adults are having it away: you can hear them on a soundtrack of panting noises off. It sounds like a gym class. Welcome to trendy Islington, where veteran writer Terry Johnson (who also directs) locates this new comedy about swingers, formerly known as wife swappers. Four couples gather for an evening of wine, nibbles and an orgy. The late arrival is Lucy, played by Pooya Mohseni, a transsexual, whose presence rocks the boat. Johnson’s play, with insane courage, walks into a minefield. Topics include the pronoun war, the gender spectrum, J.K. Rowling and transphobia. The chat is perhaps too organised, topicwise. But for the most part it’s very funny and bracingly bleak. A superb cast helps, notably Lisa Dwan as the wife locked in a grumpy, failed marriage, Will Barton as a dim hedonist stoner, and Timothy Hutton as the Yank sex tourist with off-kilter views. Recommended, not least as an advert for the joys of cocoa and a quiet night in. Watching Mrs Warren’s Profession reminded me of the story about George Bernard Shaw who once asked a lady at a party if she’d sleep with him for a million pounds. She replied that for a million, yes, she might. ‘And what if I offered you ten shillings?’, he asked. ‘What do you take me for?’ she replied angrily. ‘We’ve already established that, madam. Now we are haggling over the price.’ Written in 1893, this is Shaw’s cold, clear examination of prostitution and how poor women are driven into it by economics, not sin. For tossing a grenade down the chimney of Victorian hypocrisy, the play was banned for years. Here Caroline Quentin plays the titular madame who runs a chain of brothels in Europe unbeknown to her Cambridge-educated daughter. The novelty here being that the latter, Vivie, is played by the star’s own daughter, Rose Quentin. The play is staged on lush period sets. It’s all set for sparks – except they never quite fly. A brilliant light comic actor, Quentin is amusing as the old trout, all grandeur with submerged cockney tones. But she’s too cosy to convince as a formidable creature who runs a business empire. Rose Quentin fares much better as the spiky Vivie, wearing culottes and smoking (by gad!). Vying for her hand in marriage is Simon Shepherd as Mrs Warren’s viperish business associate and Vivie’s half-brother (Peter Losasso), whose father is a randy rector (Matthew Cottle, a hoot) with the ‘irresoluteness of a sheep’. Mrs Warren’s great emotional showdown with her daughter – ‘I kept myself lonely for you,’ she wails – should have a tragic depth but here she’s merely a devious mum trying it on with a daughter who’s immune. Shaw labelled this as one of his ‘Plays Unpleasant’. This is perfectly watchable but isn’t unpleasant, or dramatic, enough.