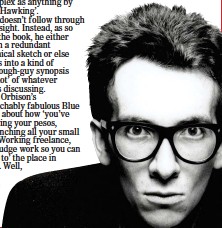 The Philosophy Of Modern Song Bob Dylan Simon & Schuster £35 ))))) Writing about music is like dancing about architecture. Whoever said it – and that old saw has been credited to everyone from Frank Zappa to Elvis Costello (below) – had a point. Music is the most mysterious of the arts. We know the effects that our favourite songs and symphonies have on us. But those effects are hard to describe – and harder again to analyse or account for. Which is where a book called The Philosophy Of Modern Song, that’s not only written by a member of the trade but by a man who just happens to have won the Nobel Prize in Literature, ought to come in handy. Certainly, Bob Dylan’s musical knowledge is both wide and deep. He discusses 66 songs here, and I defy anyone but him to be familiar with every one of them. For every entry on, say, The Who’s My Generation, there’s one on Harry McClintock or Mrs Elmer Laird (me neither). Even when Dylan does discuss a song or a writer you’ve heard of, he invariably picks a performance you don’t know. Where Or When is one of the best-known Rodgers and Hart songs. But if you know it, I’ll wager you know it either from the Ella Fitzgerald Songbook series or from Peggy Lee’s quietly smouldering version with the Benny Goodman Trio. Dylan, though, goes for the late-1950s recording of the song by Dion and the Belmonts – a gorgeous rendition, but one whose angelically innocent vocal harmonics slide blithely by the song’s tragic undertones. The odd thing is that Dylan himself recognises that mood. He talks about the ‘swirling dreamlike quality of Rodgers’ tune [giving] the listener a feeling of time as mysterious and complex as anything by Stephen Hawking’. But he doesn’t follow through on his insight. Instead, as so often in the book, he either throws in a redundant biographical sketch or else descends into a kind of noirish tough-guy synopsis of the ‘plot’ of whatever song he’s discussing. So Roy Orbison’s unimpeachably fabulous Blue Bayou is about how ‘you’ve been saving your pesos, penny pinching all your small change. Working freelance, doing drudge work so you can get back to’ the place in question. Well, yes, it is. But does that mean that all songs about wanting to get back home make for a ‘spectacular’ record? As for Dylan’s entry on Cher’s Gypsies, Tramps & Thieves, since it takes you longer to read his summary of its storyline, why not cut to the chase and just slam on that gorgeously trashy 45? Still, the great virtue of this beautifully designed and illustrated book, which Dylan has been working on for more than a decade, is that it might open the ears of his more slavish worshippers to music other than his own. I dare say even they have heard a little Sinatra or Elvis. But Dylan wants to turn them on to the likes of Bing Crosby, Perry Como, Vic Damone and Bobby Darin (above, whom Dylan loves so much he actually gets two entries) too. I wish him well – though dancing about architecture might be easier…