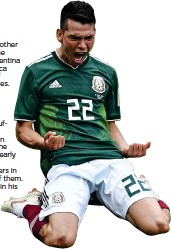 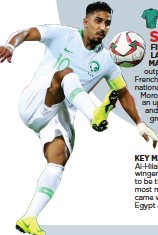 ARGENTINA FIFA RANKING 4 LAST TIME Last 16 MANAGER Lionel Scaloni — nowhere near the most famous Lionel in the Argentina party, although the former wing–back did play seven times for his country when at Deportivo La Coruna. Came in to pick up the pieces after their 2018 shambles and guided them to a long–overdue Copa America win last year. THEY’RE A BIT LIKE... Arsenal — they were good once and they could be good again now. KEY MAN Lionel Messi — who else? Argentina’s G.O.A.T. has stated this will be his last World Cup, ratcheting up the pressure on everyone to deliver him a Hollywood finale. The 35–year–old (right) comes into the finals in excellent form for Paris Saint–Germain and will be as integral to Argentina’s chances as ever. But will fate play ball? RISING STAR Julian Alvarez — Messi cannot do it all on his own and Alvarez, 22, has already shown us what he can do since joining Manchester City from River Plate. Unlikely to start every game but a fine impact player. PROSPECTS Up there among the favourites and rightly so. It is written in the stars for Messi to cap a most glorious career, isn’t it? SAUDI ARABIA FIFA RANKING 49 LAST TIME Group stage MANAGER Herve Renard — more outposts than Michael Palin. The Frenchman, 54, is coaching his sixth national team and was in charge of Morocco four years ago. Has overseen an upturn in Saudi Arabia’s fortunes and they topped their qualifying group ahead of Japan and Australia. THEY’RE A BIT LIKE... Your quintessential lower-league FA Cup giantkiller — no one expects them to win but you never know. KEY MAN Salem Al-Dawsari — one of 12 Al-Hilal players in the squad. The talented winger (left) and captain will be expected to be the Saudis’ game-changer. The most memorable moment in 70 caps came when he scored the winner against Egypt at the 2018 World Cup. RISING STAR Firas Al-Buraikan — the striker, 22, has an enviable scoring record for his club, Al-Fateh. PROSPECTS They will be well supported given their proximity to Qatar and wellprepared, having just had a two-month training camp with six friendlies. But will still struggle to get out of the group. MEXICO FIFA RANKING 9 LAST TIME Last 16 MANAGER Gerardo Martino — the Argentine is another nomadic manager who is best known for taking the Barcelona job after Tito Vilanova in 2013. Was Argentina coach when they agonisingly lost the Copa America final on penalties in 2015 and 2016. Took charge of Mexico in 2019 and has won two–thirds of his games. THEY’RE A BIT LIKE... Everton — regulars at the highest level but never do anything spectacular. Mexico have lost in the last 16 in their past seven World Cups. KEY MAN Hirving Lozano — with Raul Jimenez suffering injury issues and Jesus Corona missing the tournament, more of the creative burden will fall on the lightning–quick Napoli winger (right). Luckily, he has been part of a winning Napoli side during the early weeks of the season. RISING STAR Jorge Sanchez — the youngest players in the squad are 24 and right–back Sanchez is one of them. Ajax talent–spotted him playing for Club America in his homeland and see plenty of potential. PROSPECTS They will tussle it out with Poland for second spot behind Argentina, but true to form, they are unlikely to get beyond the last 16. POLAND FIFA RANKING 26 LAST TIME Group stage MANAGER Czeslaw Michniewicz — has only been in post since January following Paulo Sousa’s decision to leave for Flamengo before the playoffs. Led them to a 2-0 win over Sweden to book their spot in Qatar but results overall have been mixed. THEY’RE A BIT LIKE... West Ham — a bit more daunting to face in theory than in reality. KEY MAN Robert Lewandowski (left) — at 34, this is likely to be his final World Cup and he will be determined to do better than last time, when he failed to score as Poland crashed out after the group. Is certainly enjoying life with Barcelona, scoring 18 in 19 games. RISING STAR Jakub Kaminski — the 20-year-old winger is already a league champion with Lech Poznan and now plays for Wolfsburg in Germany. Scored his first international goal against Wales in the Nations League. PROSPECTS Have a decent chance of getting through to the knockout stages, especially if they beat Mexico in their opener.