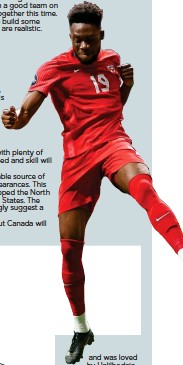 BELGIUM FIFA RANKING 2 LAST TIME Third place MANAGER Roberto Martinez — his contract expires at the end of the year and it feels like the last-chance saloon for the Spaniard to get the best out a talented Belgian generation. Led them to a third-place finish in 2018 before they were knocked out by Italy in the Euro 2020 quarter-finals. Under pressure to deliver this time. THEY’RE A BIT LIKE... Paris Saint-Germain — incredibly talented team capable of playing sparkling football but always the bridesmaids in the top competitions. KEY MAN Kevin De Bruyne (left) — not many superlatives left to describe this man’s feats with Manchester City, but on the international scene it is a different story. More than ever, Belgium’s ‘Golden Generation’ will look to him to provide the spark that leads to the big wins. RISING STAR Charles De Ketelaere — the 21-year-old playmaker signifies life beyond the established stars. AC Milan signed him from Club Brugge in the summer and is tipped for a bright future. PROSPECTS Belgium look such a good team on paper, they just need it to gel together this time. This group offers the chance to build some momentum and the semi-finals are realistic. CANADA FIFA RANKING 38 LAST TIME DNQ MANAGER John Herdman — the coach from Consett, County Durham, is barely known in England but that is about to change as he leads Canada in their first World Cup since 1986. THEY’RE A BIT LIKE... Wimbledon — peaked in the late 1980s and it has been a long, hard road back. KEY MAN Alphonso Davies (right) — the most recognisable Canadian player by some distance. For Bayern Munich he is usually deployed as a left-back with plenty of licence to push forward. The 21-year-old’s electric speed and skill will be essential if Canada are to trouble anybody. RISING STAR Jonathan David — the team’s most reliable source of goals, the Lille forward has 22 in 34 international appearances. This included nine in qualifying, as Canada surprisingly topped the North American final round ahead of Mexico and the United States. The nine goals scored so far this season for his club strongly suggest a man in top form. PROSPECTS It is likely to be a steep learning curve but Canada will be determined not simply to make up the numbers. MOROCCO FIFA RANKING 24 LAST TIME Group stage MANAGER Walid Regragui — a former Morocco defender who won 45 caps, Regragui only took over the job in August following the sacking of Vahid Halilhodzic. As a result, he has had very limited preparation time with the players, but they did beat Chile 2-0 in a recent friendly. THEY’RE A BIT LIKE... Crystal Palace — plenty of flair players in wide areas and occasionally trouble the big teams. KEY MAN Achraf Hakimi — star of the side along with Hakim Ziyech, who has been persuaded to come out of international retirement since the change of coach. Paris SaintGermain full-back Hakimi (right) offers Morocco something special and was loved by Halilhodzic, who annoyed everyone else by saying: ‘I am not sure his team-mates are playing the same sport.’ He is still just as vital to the team under the new management. RISING STAR Anass Zaroury — making a name for himself playing for Burnley, where he has scored four goals. Formerly a Belgium youth team player, the 22-year-old has replaced the injured Amine Harit, having been persuaded to follow his ancestor’s heritage. PROSPECTS Have enough talent in their squad to trouble defences but whether they can sustain a performance against both Belgium and Croatia is doubtful. CROATIA FIFA RANKING 16 LAST TIME Runners-up MANAGER Zlatko Dalic — became a national hero after guiding Croatia to the final of the 2018 World Cup, where they lost 4-2 to France. However, things have since regressed; they were beaten by Spain in the last 16 at Euro 2020 and Dalic was criticised during the 2020-21 Nations League campaign. The team responded well, however, to reach next year’s Nations League finals in the latest edition. THEY’RE A BIT LIKE... Borussia Dortmund — you do not want to face them on their day but ultimately they never quite get over the line. KEY MAN Luka Modric — this is not a cut and paste from the last tournament, 37-year-old Modric (right) remains Croatia captain and main inspiration. It could well be his swansong at a major tournament but he has aged like a fine wine, as he displayed in winning his fifth Champions League crown with Real Madrid last season once again proved. RISING STAR Josko Gvardiol — the 20-year-old RB Leipzig defender is considered a prime talent and was linked with Manchester United during Ralf Rangnick’s interim tenure. Forced his way into the Croatian back line during the Euros and has not looked back. PROSPECTS Unlikely to be as successful as last time but you would not be surprised to see them in the last eight given how long many of their players have been together.