BROADCASTING bosses have been accused of using Strictly Come Dancing to boost the profile of other BBC programmes by hiring eight of the Corporation’s stars for the show. More than half of this year’s celebrity contestants are already working for the network – including rugby player Ugo Monye, who is a team captain on A Question Of Sport. Sources close to Strictly suspect that television executives signed him up hoping that his popularity would transfer to the struggling quiz show. Producers also teamed up the 38-year-old former England winger with their most popular professional dancer, Oti Mabuse, who has won the last two series of the popular dance show. Eight of this year’s 15 celebrity dancers are already on the BBC payroll, a massive increase on previous years, which have seen numbers of the Corporation’s employees creep up from three out of 15 in 2018. A source told The Mail on Sunday: ‘It’s obvious that Strictly is being used as a walking advertising board for other shows. ‘The BBC has been heavily criticised across the board of late, and getting bums on seats watching their shows justifies its existence and licence fee-payers’ money.’ As well as Monye, deaf EastEnders actress Rose Ayling-Ellis is taking part, just as the long-running soap’s viewing figures fall to an all-time low. While more than 30 million viewers were watching on Christmas Day 1986 when Den Watts told wife Angie he wanted a divorce. The average figures for last August were 1.7 million. The BBC’s new Newsround presenter Rhys Stephenson is also a contestant, as sources say that he is being lined up to be a future superstar of the network. Actress Nina Wadia’s signing to the Saturday-night show coincides with the broadcaster’s highly anticipated six-part thriller The Outlaws, which viewers can see her starring in later this month. Sara Davies, from BBC2’s Dragons’ Den, is also on the roster, while CBeebies star Tilly Ramsay is one of Strictly’s most talked about stars of the series so far. Dan Walker, the presenter of BBC Breakfast, also agreed to take part this time around after several years of speculation. His programme is in a long-running battle with ITV rival Good Morning Britain. Olympic gold medallist Adam Peaty, who is partnered with high-profile dancer Katya Jones, also made short programmes for the network during the games in the summer. Senior executives are understood to be considering him as a future sports presenter. The BBC has previously banned reality television personalities from appearing on the dance show, although it made an exception for Made In Chelsea star Jamie Laing last year. It also refuses to take celebrities who have previously starred on other high-profile shows such as I’m A Celebrity... Get Me Out Of Here! and Dancing On Ice. The BBC declined to comment. 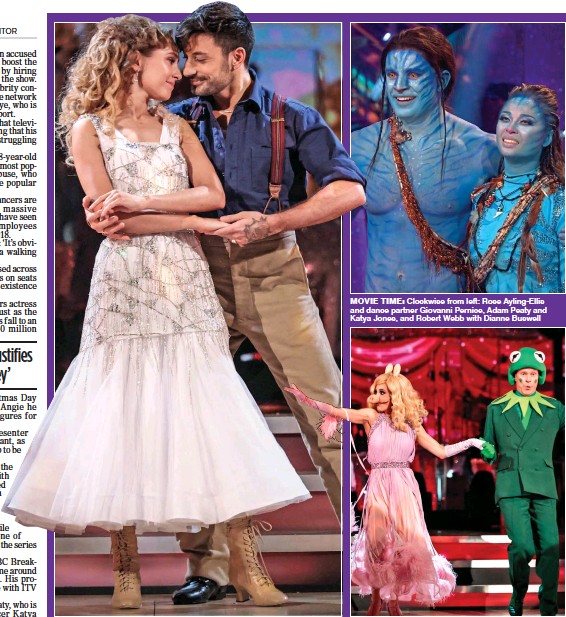