The land where rape victims end up being the accused

OF ALL the inequities facing women in Qatar, it must surely rank among the most perverse. Campaigners say victims of sexual violence ‘can easily become the accused’ in the authoritarian Gulf state, due to the government’s extreme interpretation of Islamic law. Many cases have emerged of men being taken at their word claiming sex was consensual, leaving the accuser facing charges of having sex outside of marriage. Punishments for the crime of ‘zina’ – any act of illicit intercourse – normally involve a year in prison and, if the woman is Muslim, up to 100 lashes. Rothna Begum, senior women’s rights researcher at Human Rights Watch, told The Mail on Sunday of her fears that zina laws will be brought into focus at next year’s World Cup. ‘Our concern is that while Qatar is a safe country, the World Cup – as with any major event – will inevitably see an increase in sexual violence cases and the risk of women, possibly football fans from other countries, becoming double victims,’ said Ms Begum. ‘In addition, support for sexual violence victims is non-existent. It is very worrying.’ Around the time Qatar began lobbying for the rights to the World Cup, stories about women punished under zina laws stopped appearing in state-run papers. Since then, Qatar has sought to gloss over anything that might present a negative image. In March, a report by Human Rights Watch highlighted discrimination through the male guardianship system, which requires them to seek male approval to marry, study or travel. It says Qatari women face ‘deep discrimination in almost all aspects of their lives’. Examples abound. A British woman abandoned by her Qatari husband told the MoS that she is unable to return to the UK with their children because he refuses to give his permission. The woman, who lives in Doha, said: ‘Society and the law are on his side. It always favours the man, yet he was abusive during our marriage and beat me up for some perceived slight. He hasn’t seen me or the kids for years yet still exerts this power over me. I am trapped here. I tried to get a divorce but it was dismissed. If I went to the airport with my children, I would be arrested.’ In 2019, Noof al-Maadeed, then 21, escaped Qatar after years of domestic abuse. She said she was ‘only allowed to go to school and back. Anything else [and I could] expect a beating’. Unmarried women under 25 cannot travel abroad without the permission of their male guardian. But Maadeed took her father’s phone and used it to process an exit permit, then climbed out of her bedroom window to go to the airport. She flew to Ukraine then the UK, where she claimed asylum. Women also face discrimination when trying to access health care. One woman claimed that the state Women’s Hospital in Doha displayed a poster advising women that if they are unmarried and need to see a gynaecologist ‘you need your father’s permission. If you are married, you have to show a marriage certificate and your husband’s ID card’. Speaking anonymously, a physician told researchers that if a woman ‘is pregnant, or she comes for abortion or something pregnancyrelated, we usually need confirmation that she is married, and to have a certificate that she is married or divorced’. Emergency care is provided – when an unmarried woman is in labour, for instance – but hospitals may report the woman to the police. In one shocking case last year, female airline passengers – including 13 Australians – were subjected to ‘appalling’ internal examinations by Qatari officials trying to find a woman who had abandoned her newborn baby at Doha airport. Meanwhile, women’s football, though it exists, does not exactly flourish. While a Qatari national women’s team was formed with some fanfare in 2010 (curiously, just two months before the country won the rights to host the 2022 World Cup) it doesn’t appear to have been active for seven years. FREE: Noof alMaadeed, who fled to the UK 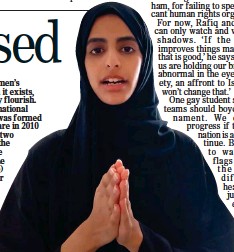