Thrilling TV – and the reason I’m a Ross, not a Rosenthal...

Ridley Road BBC1, Sunday ★★★★★ Murder Island Channel 4, Tuesday ★★☆☆☆ The BBC’s new Sunday night drama series Ridley Road is great. Just thought I’d get that out there. Also, to its credit, not a glimpse of a submarine, or anyone trapped in a torpedo tube, which has to be a relief. It’s a Trojan Horse of a show. Set in 1962, it has the production values of Call The Midwife – I initially kept expecting an ectopic pregnancy and Trixie to ride to the rescue on her bike – but contained within is a dark, chilling tale of horrific antisemitism. This was exactly the time my grandfather, a Hackney shoe wholesaler, changed our family name from ‘Rosenthal’ to ‘Ross’ because, as he told me, ‘People didn’t want to do business with Jews.’ (Or ‘Yids’, as the people who didn’t want to do business with him would have said. I have skin in the game, you could say.) This is adapted by Sarah Solemani from a novel by Jo Bloom which, in turn, is based on true events and, in particular, the 62 Group formed by Jewish men, mainly tailors or cab drivers, to fight back after attacks on synagogues and Jewish buildings. The storytelling is first class and opens with a young blonde woman sieg-heiling as sun pours through a window. We then spool back some months previously and discover that the woman is Vivien Epstein (a career-making performance from Agnes O’Casey), actually a dark-haired, Jewish hairdresser from Manchester. So what happened to her? We want to know. We need to know. The story is told through Vivien, who is unhappily engaged to a man she doesn’t want to marry (poor Jeremy) and runs away even though she had been promised ‘the largestever engagement photo in The Jewish Chronicle’. If that doesn’t do it, nothing will. She heads to London to hunt down her true love, Jack (Tom Varey), who she discovers is embedded with the far-Right National Socialist Movement (NSM) – a precursor to the National Front – led by Colin Jordan (Rory Kinnear at his most quietly frightening). She witnesses the antisemitic rally held by Colin in Trafalgar Square, where a riot broke out between attendees and protesters. She dyes her hair blonde and becomes embedded herself. Can she win Colin round and discover what further attacks are planned so they might be headed off? Will she sleep with him? What’s the housekeeper up to? This plays out with the tension of a thriller. The main narrative thrust is this espionage, but there’s much going on elsewhere and it’s all so beautifully handled. Swinging 1960s London is captured with the aid of vintage footage, while the cast is terrific. Eddie Marsan plays Vivien’s enraged Uncle Soly, leader of the 62 Group, while the utterly wonderful Tracy-Ann Oberman plays his wife Nancy, a cool-headed matriarch. Also, we have Samantha Spiro (Auntie Liz from Grandma’s House!) as Vivien’s mother. In the first episode she is mostly a comedy figure, but as the series continues – all four episodes are available and I’ve watched ahead – her character deepens affectingly. Still, she has some of the best lines. ‘Never accept a drink from a man,’ she advises Vivien. ‘You’ll wake up bleeding.’ This has some distressing scenes – an arson attack on a yeshiva; members of the NSM urinating on Jewish graves – but they are necessary. It’s sometimes forced and clumsy when it attempts to draw contemporary parallels – when the NSM chants ‘Take back our country’ we are obviously meant to think of Brexit and ‘Take back control’ – but it is excellent at showing how antisemitism is incited. But mostly you are just wholly invested in the characters. Meanwhile, I have to tell you, when I was at school, I was called ‘the Jesus-killer’, by the RE teacher, no less. Will it ever stop? In Murder Island a dead body is discovered. But this is no regular crime series. The plot is by famed crime writer Ian Rankin but the detectives are ordinary people drafted in to find the killer. They must visit the crime scene, interview witnesses, collect evidence. It sounds better than it is. It’s set on the Scottish island of Gigha, which looks so beautiful I’ve already investigated places to stay there. The dead body is that of a young woman, and you do wonder: did it have to be a dead young woman? Again? The islanders (played by actors) are all suspects and have obviously been instructed to give off a weird vibe and appear shifty. It’s hard to know at what level we are meant to feel involved. The contestants don’t draw you in, apart from the two sisters who are trying to prove themselves to their father, who has always called them ‘thick’. (Nice work, Dad.) There are real murder detectives on hand to offer advice and tick them off for, say, missing vital evidence. But there is no tension or excitement, and progress is achingly slow. The trouble with amateurs is that they are, you guessed it, amateur. You know those murder-mystery weekends? I’ve never been on one, but even so, this feels like one of those, filmed. 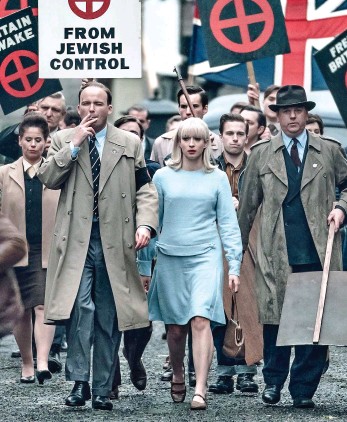