Blair rues a lack of delivery to Darcy

EDINBURGH head coach Mike Blair believed the failure to get enough ball out wide to his attackminded stars such as Darcy Graham cost his side victory over the Stormers. The winger put his side ahead with just three minutes on the clock — his 20th try for his club which saw him reach the 100-point total — but for most of the match after that was starved of the ball. He did his best to spark his side with two great runs up the wing but he was bundled into touch on both occasions. Edinburgh — who were relieved to watch a last-minute drop-goal attempt from Tim Swiel go well wide that would have won the South African side the game — were 14-0 up after just six minutes but couldn’t hold their lead. All 40 points were scored in a pulsating first half with the second 40 minutes being played mostly in the midfield. ‘We need to find ways of getting our strike runners on the ball, particularly Darcy,’ said Blair. ‘Ramiro Moyano on the other wing and Damian Hoyland when he came on, too, need to get their hands on the ball a bit more. They are our strike runners and they are the guys who are going to cause defences issues. ‘It was a shame that the ball did not come Ramiro’s way but he did have an excellent kick and chase on the far side. He is a talented player and we just need to get these guys on the ball more.’ The Edinburgh head coach singled out fly-half Jaco van der Walt — who put over two conversions and two penalties — for the way he kicked well and tried to spark his team. ‘He was excellent for us,’ said Blair. ‘He has played with a lot of confidence over the last couple of games and I am delighted at the way he has come into the new season. ‘He did well in that game which was not as frustrating as last week when we lost in Treviso but there were elements of frustration in there. We did some brilliant stuff in the first half but this Stormers defence is an excellent one and it takes times to break them down but we did that really effectively in the first half. ‘In the second half, I don’t know if both teams got nervous, but each team seemed to shut up shop. It was not much of a second half but the first was fun.’ Edinburgh got off to the best possible start with two converted tries in he first six minutes, both converted by Van der Walt. First Graham was played in by Van der Walt for the opening score. Then three minutes later, Van der Walt was in action again with his pass releasing Ben Vellacott, who ran in to score. The South African side recovered well with full-back Warwick Gelant going under the posts three minutes later. Swiel put over the conversion and then followed it up with a successful penalty. Graham nearly got in at the corner for his second try but a superb lastditch tackle from Sergeal Petersen bundled him into touch. It took to the half-hour mark before another point was scored with Van der Walt putting over another penalty. Stormers struck back when No8 Evan Roos played in Paul de Wet for a try converted by Swiel but the home side immediately went up the other end with Van der Walt putting over another penalty. Three minutes before the break, another Swiel penalty levelled the scores. Just after the interval, Graham got on the end of a cross kick from Van der Walt but put a foot in touch as he sprinted to the line. The incredible excitement of the first half was replaced with a mix of errors from both sides. It took until the hour mark before there was even a chance to put points on the board for either side and when there was Van der Walt was just short with his long-range penalty attempt. The miss signalled the start of a period of dominance from Edinburgh, with the fly-half trying his best to spur them on. Stormers fly-half Swiel then missed a penalty to put his side ahead. As the game reached its climax, the errors increased and the kicking to touch — especially from home full-back Henry Immelman — became more and more erratic. Flanker Jamie Ritchie was making a lot of hard yards near the end but Edinburgh couldn’t find a way through. With the clock ticking into the red, the Stormers showed great discipline to turn defence into attack. They managed to get into drop-goal range but the effort from Swiel drifted well wide as the game finished in a draw. SCORERS: Edinburgh — Tries: Graham, Vellacott. Cons: Van der Walt (2). Pens: Van der Walt (2). Stormers — Tries: Gelant, De Wet. Cons: Swiel (2). Pens: Swiel (2). 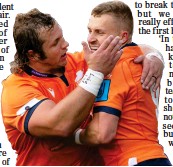 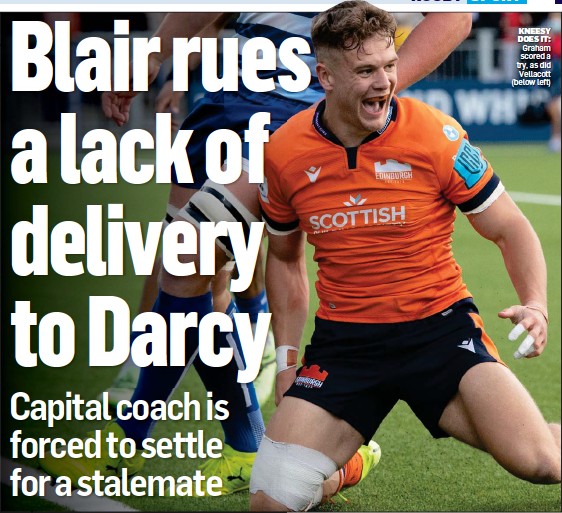